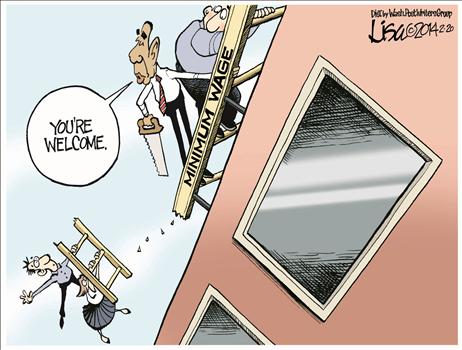 And I would add only one explicit corollary to this:

END_OF_DOCUMENT_TOKEN_TO_BE_REPLACED

Congratulations, folks! At least half-a-million of you soon won’t be “stuck in a job” anymore…

(via Reuters) – “…Raising the U.S. federal minimum wage to $10.10, as President Barack Obama and Democrats in Congress are proposing, could result in about 500,000 jobs being lost by late 2016, the Congressional Budget Office (CBO) estimated on Tuesday…”

END_OF_DOCUMENT_TOKEN_TO_BE_REPLACED

Did you hear the great news?

(via the Associated Press) – “…Several million people will reduce their hours on the job or leave the workforce entirely because of incentives built into President Barack Obama’s health care overhaul, the Congressional Budget Office said Tuesday.

That would mean job losses equal to 2.3 million full-time jobs by 2021, in large part because people would opt to keep their income low to stay eligible for federal health care subsidies or Medicaid, the agency said. It had estimated previously that the law would lead to 800,000 fewer jobs by that year…”

Sure, sure, that doesn’t seem like great news. But that’s exactly why the White House’s crack PR spin-meisters (CODENAME: the “Alternate Reality Team”) was activated as soon as this news hit. The guys from the A.R.T. (motto: “Anyone can lie, but what we do is ART”) instantly assured everyone within earshot that y’all are just too stupid to understand complex economy-related terms, such as “fewer jobs” and “2.3 million of ’em“:

END_OF_DOCUMENT_TOKEN_TO_BE_REPLACED

Just as he has for the past 5 years, President “YouCanKeepYourPlan” Obama believes that no matter what he says, as long as he says it over and over and over again, it’ll somehow magically come to pass. Or at the very least, that we’ll believe him just long enough for him to get his way.

That was an interesting if misguided theory at the advent of his tenure. But now, with the country trillions further in debt and no end in sight, it’s now more accurately to be considered either “dangerous” or “delusional”.

Honestly, I think it’s a toss-up:

Obama now parading victims of his terrible economy in front of cameras. As always, he’s really upset at whomever is president.

END_OF_DOCUMENT_TOKEN_TO_BE_REPLACED

Hey, what happened to Obama’s “laser-like focus” on jobs?

Lost in all of the Syria/Obama/will-he-or-won’t-he headlines from the past several days is the massive devastation of the United States jobs market.

Glenn Foden over at Townhall.com summarized it perfectly:

To place Glenn’s cartoon into context, all you need is this article from Bloomberg News:

“…While unemployment dropped last month to 7.3 percent, the lowest level since December 2008, the decline occurred because of contraction in the workforce, not because more people got jobs. Labor-force participation — the share of working-age people either holding a job or looking for one — stands at a 35-year low.”

END_OF_DOCUMENT_TOKEN_TO_BE_REPLACED

A lesson in Labor: “Superman Joins A Union” (via @SCrowder)

Posted on September 2, 2013 by justturnright | 6 comments

For many of us, Labor Day signals the unofficial end to summer, while for others it’s just another 3-day weekend. But its history is an acknowledgement and celebration of our working men and women in the United States.

And yet the holiday is often portrayed as specifically for Labor Unions, which really doesn’t make sense nowadays, if it ever did. Back in the 1950’s (when over a third of the nation’s workers were unionized) it was at least arguable. But now? That number has dwindled to roughly only 12% of all workers, …and falling. And if we take out Public Sector unions, it drops to around 6%.

A variety of reasons have contributed to this, but the primary culprit is inescapable: Union Leadership itself. 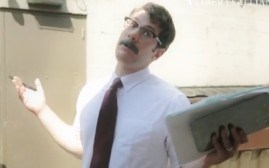 And to illustrate what I mean (or just for its sheer entertainment value), please take a moment to enjoy the following clip from one of our favorite guys, Steven Crowder.

END_OF_DOCUMENT_TOKEN_TO_BE_REPLACED

Tired of poor Customer Service? Blame our Culture of Dependency

Excellent Customer Service is one of the clichéd catch phrases that every company SAYS is important to them, but too few seem to really emulate.

It’s evidenced by the automated phone messages that repeatedly assure us that “our call is important to them”, and then make us jump through an endless labyrinth of prompts and codes. We see it with the grocery store cashier who doesn’t even make eye contact with us as he or she drones “…have a nice day…” in a Ben Stein-ian monotone.

It’s not like this is rocket science, gang: a sincere smile, a pleasant “how may I assist you?”, and then actively helping us is really all we want.

We just don’t get it very often.