FLASHBACK: the President vows that #Obamacare will be “Deficit Neutral”

How many lies did the president tell in getting Obamacare passed?

“As numerous as the stars in the sky…”

OBAMA: “And I promise you. We’re already starting to look at the fiscal year 2011 budget and the out years, and although we are in the midst of a recession, and we inherited a big structural deficit, no one’s more mindful than me of the fact that we can’t have a bill that simply blows up an additional entitlement that’s not paid for.”

END_OF_DOCUMENT_TOKEN_TO_BE_REPLACED

How the Government *protects* our Tax money: “Spend it or Lose it!!!”

From the group Bankrupting America comes one of the better satire videos in recent memory. A tremendous send-up of NBC’s ‘The Office‘, they’ve re-imagined it as a “normal” Federal Government agency: the “Department of Every Bureaucratic Transaction”, or D.E.B.T..

After you watch the clip below, make sure you stop over at their website. It covers the everyday waste going on in all areas of our government, and how irresponsible behavior is consistently rewarded. It’s chockablock with other videos, graphics and articles, so take your time looking around.

***NOTE: This video currently has about 10,000 views on YouTube right now. From what I’ve seen, your average cat video can get 30,000. A subject THIS important needs to generate waaay more than that.

END_OF_DOCUMENT_TOKEN_TO_BE_REPLACED

The Left in general, and journalists specifically, are having a hard time with the recent Detroit bankruptcy.

Detroit has been a literal liberal paradise, with its solely Democrat controlled government, rampant unionization, and spend-like-there’s-no-tomorrow approach to city finances. After observing the various reporting over the last few days, I’m now convinced that most reporters simply don’t comprehend what happened.

It’s not that they aren’t biased: they are. But it’s more than that. They’re also economic morons.

Personally, I blame their schooling:

END_OF_DOCUMENT_TOKEN_TO_BE_REPLACED

Are you planning on paying for your kid’s college? Good luck with that…

I have two sons, and I have no idea if they’ll be going to college.

Now don’t misunderstand: both of my boys are extremely bright (my admitted parental bias notwithstanding). My concerns are twofold: one is the Anti-American, Leftist agenda that I see being forced into the schools, and the other is cost.

We’ve previously addressed my first concern, with our school’s (Kindergarten through Graduate school) overarching goal apparently being the creation of one class of “Generation Cupcake” after another, so I’m going to skip that for today.

My second concern (COST) is just as problematic, and just as unnecessary.

NEW YORK, Feb 26 (Reuters) – With rising U.S. college costs and too many options, parents are saving less than they expected for their children’s higher education.

END_OF_DOCUMENT_TOKEN_TO_BE_REPLACED

A perfect illustration of our current dilemma.

(VIDEO) Nancy Pelosi: “We Don’t Have A Spending Problem…” 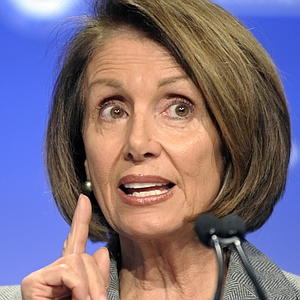 What else do I need to say?

How many trillions will our nation need to owe until we DO have a “spending problem”, may I ask?

THIS is what passes for wisdom on the Left…and it nauseates me: