The President: “Who ya’ gonna believe – ME, or your own lyin’ eyes?”

For weeks, we’ve been bombarded with “Sequester = Death” via every news outlet and our President himself.

Or, basically, a 24/7 message which can be boiled down to:

Astonishingly, the media may actually be catching on to this scam. Ed over at HotAir.com quoted the National Journal, saying “…(the Obama White House’s) best-case political course hinges on the economy screeching to a halt“.

And then, similarly, you had this from the Washington Post:

Over the past week, President Obama has painted a picture of impending disaster, warning of travel delays, laid-off firefighters and pre-schoolers tossed out of Head Start.

Conservatives accuse Obama of exaggerating the impact, and some White House allies worry the slow-moving sequester may fail to live up to the hype.

END_OF_DOCUMENT_TOKEN_TO_BE_REPLACED

How to destroy a city

Okay, America, question time: do you WANT us to become Detroit?

‘Cause that’s where we’re headed…

Hiroshima was reduced to rubble in an instant.

The year was 1945. America dropped an atomic bomb on this proud city, leading to the death of 60,000 people and the destruction of the city’s infrastructure.

The devastating impact of the weapon led to the immediate end of the Pacific War, concluding World War II.

When you look at the photos of Hiroshima in the aftermath of the bombing, your first reaction might be that this city will never rise again.

You would be wrong.

Today, Hiroshima is a thriving, beautiful city. It’s population has grown from about 380,000 in 1945 to nearly 1.2 million today. The city has flourished under capitalism and is devoid of a welfare system.

Detroit was reduced to rubble more slowly than Hiroshima.

Unlike Hiroshima, Detroit’s population has declined precipitously, from 1.7 million in 1960 to a little more than 700,000 today. The…

Obama: “There’s NO smart way” to make these cuts 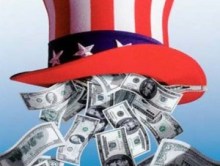 Our President wants us to know one thing: we can never, ever, ever reduce Government spending, in any way. We simply can’t.

END_OF_DOCUMENT_TOKEN_TO_BE_REPLACED

A perfect illustration of our current dilemma.

[Part of this article was originally published in February 2009.]

I’m not sure why my thoughts strayed to piano teaching the other morning when I was praying. (Why do my thoughts ever stray at that time? A perennial question.  Sigh.)  I recalled my conversation with Angela about the “hard parts” needing more practice than the “easy parts.”

“If some measures are really easy for you, and some give you lots of trouble, how does it help to just start at the beginning and play the piece straight through?  You’d always be playing the easy parts just as much as you do the hard ones.”

END_OF_DOCUMENT_TOKEN_TO_BE_REPLACED

IRS problems have nothing to do with Budget Cuts…

Our Federal Government has now, officially, “jumped the shark” with this Sequester nonsense.

Just read a story in Politico which reported (with no sense of satire or sarcasm) that the potential budget cuts in the IRS:

“…will most likely translate to fewer specialists on hand to help taxpayers with their returns and to root out fraud — two tasks that watchdog groups say need more, not fewer, hands.”

This just shows how desperate the Obama White House has to be, if they’re willing to trot out the IRS as a reason not to endure the world’s tiniest budget cut (and yes, I know, it’s not even a real “cut”).

The Internal Revenue Service may be the least popular Government Agency in existence. This isn’t entirely their fault: “tax collector” has had a deservedly poor reputation since before the Bible went to press. But I still laughed out loud at the notion we’re supposed to be trembling with anxiety over the IRS’s dilemma. After all, if they really wanted to “root out fraud”, all they’d need to do is walk down the hall, considering how many folks in the White House (and throughout the Federal Government itself) owe back taxes.

END_OF_DOCUMENT_TOKEN_TO_BE_REPLACED 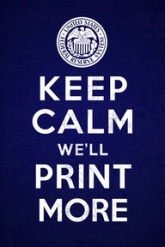 I’m not an economist, I don’t play one on TV, and staying at a Holiday Inn Express wouldn’t help me one iota. But these days, anytime I hear the words ‘Federal Reserve‘ and ‘print money‘ in the same sentence, I start paying reeeeaaal close attention.

I carved out as much of the economics minutiae in the article below as possible, to make it easier for everyone to follow, …including me.

“…we once again refer readers to the paper released yesterday by Morgan Stanley’s Greenlaw and Deutsche Bank’s Hooper, which discusses not only the parabolic chart that US debt yield will certainly follow over the next several decades, but the trickier concept known as the Fed’s technical insolvency, or that moment when the Fed’s tiny capital buffer goes negative [***which the ZeroHedge guys refer to as the “D-Rate” ].

Hey, THAT doesn’t sound very good! And this sounds worse:

END_OF_DOCUMENT_TOKEN_TO_BE_REPLACED

“Everything’s Amazing, and NO ONE is Happy”

Today’s post title, stolen from the opening minutes of a video we posted a few weeks back, is as good a summation as I’ve heard for our nation today.

Our lives are filled with wonders which were unimaginable just a short time ago: tiny cell phones, huge flat-screen TVs, laptop computers & tablets, and every other sort of convenience for our homes.

And yet, much like spoiled little Veruca Salt in ‘Charlie & The Chocolate Factory‘, too many folks in our nation today want what they want right now, …and upon receiving it are still not satiated. They merely move on to the next “want”. They never seem to be truly happy or at peace.

Which begs the obvious question, WHY?

I’m betting we could ALL guess at a few of the likely reasons: