Post-shutdown, it’s on: the #TeaParty vs. the GOP

Yes, the Government Shutdown is over, and the Federal Leviathan is lurching forward once again. Of course, this is cause for wild celebration among the Left, even as they continue to blithely impugn the motives of their political opponents.

But the problems that brought this confrontation about are still here: rising debt (thus the necessity of raising the Debt Ceiling yet again), grossly expanding government, and ever-reducing freedoms. A weakening dollar, burgeoning entitlements and continued unemployment. Full-time jobs being replaced by part-time ones, and the advent of the “glitch”-riddled Obamacare.

All this and more was (and remains) the reason so many are insisting we need to change our ways, or perish.

END_OF_DOCUMENT_TOKEN_TO_BE_REPLACED

Ted Cruz: “We MUST defund #Obamacare…”

A new video (below) from the wizards over at Heritage.com, featuring Senator Ted Cruz.

It’s been over three years since Obamacare was passed, and the country STILL doesn’t like the law. But what are our options?

END_OF_DOCUMENT_TOKEN_TO_BE_REPLACED

“Tea Party vs. the #IRS”: the movie Hollywood will never, EVER make

After my post the other day, I’ve been thinking a lot about movies. And last night it hit me: I’ve got an idea for a screenplay that just can’t miss!!

…A group of freedom-loving patriots, ordinary folks hailing from ordinary hamlets (we’ll call them the “TEA Party”), witness their beloved country being taken over by a hostile State.

Rallying around a single man’s call to stand up and fight, they answer in droves. Neighborhood by neighborhood, then town by town, they band together across the entire country, creating an impressive force which positively impacts an election.

Then, the State fights back, attempting to crush and grind these groups out of existence, or intimidate them into silence.

END_OF_DOCUMENT_TOKEN_TO_BE_REPLACED

Many moons ago, an old college professor of mine told me that Bullet Points make it easier for people to remember what you say. And since I think the following is kinda’ important, I’ll give his advice a shot.

END_OF_DOCUMENT_TOKEN_TO_BE_REPLACED

(Our thanks to ‘Conservative Sue’ over at the Red Pill Report) 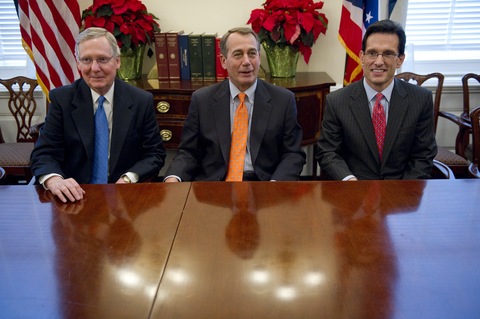 Well, the votes have been counted, and it appears the Democrats and Republicans have now passed a ‘fiscal cliff’ deal that represents a big tax increase with no significant long term spending cuts.  Outspoken critics of this deal include Senators Mike Lee, Rand Paul, and other Tea Party favorites,

What Speaker John Boehner has managed to accomplish with his adept political deal-making skill is to get the GOP blamed for the biggest tax increase in the last two decades while simultaneously increasing the deficit and kicking the spending cuts down the road for ‘another day‘ that, most agree, will never come.  And, to add insult to injury, the mainstream media is in full propaganda mode blaming the teaparty for obstructionism and a ‘bad deal‘ even though the teaparty has been pretty much united against this proposal from the start.

What does the GOP stand for?  Limited…

With the Wisconsin recall election now firmly in our rearview mirror, it’s time to assess where we’re heading and the other realities impacting our country.

Let a friend of the blog, Bill Whittle, help make sense of recent events and the lessons learned.

CRITICAL: a U.S. History Lesson in under 10 minutes

A number of items are coming to a head:

All these events are signalling a need for change. No, not the naive-yet-dangerous “Hope and Change” that Obama carped about in 2008. It’s a change, a rejection, of the ruinous path that we’re on. It’s a change FOR standing up for our unalienable rights and freedoms.

And primarily, when you get right down to it, it’s a change that was heralded by these guys.

This video is over a year old, and it’s even better and more apt now than it was then. A quote from it:

“It is the people with the Gadsden Flags – the ones calling for less government – that are on the side of the future… not the public sector union members living in the past to preserve benefits and entitlements that OTHER PEOPLE have to pay for… No, these Public Sector Unions actually have become the old, corrupt alliance of money and political power that they themselves were created to destroy.”

Watch it all: you’ll get a wonderful history lesson (or at least a great refresher course), and see how/why our history is tied into our future.

Some of the commenters and I were having a conversation about this yesterday.

If the “Cleveland 5” was from the TEA PARTY, do you think today’s news would only be found on a few blogs and the local Cleveland news or, just maybe, some national news agency (like, ALL of them) would be gathered outside the courthouse right now?

But since it concerns the harmless, mostly-peaceful Occupoddos? Nothing to see here, folks….

CLEVELAND – Dozens of members of Occupy Cleveland showed up at a Cleveland courthouse to support the five people charged in connection with an alleged plot to blow up a northeast Ohio bridge.

The suspects had the charges — conspiracy and attempted use of explosive material to damage physical property affecting interstate commerce — read to them in open court.

So, the Occupy Guys immediately distanced themselves from these 5  terrorists, since they didn’t represent the cause, …and then dozens of Cleveland Occupy members show up at the courthouse to show their support …..for the people who don’t represent their beliefs.

New slogan for the Occupoddos: “We blame the fact that we’re idiots on the 1%”.