Good grief, what are the “Global Warm-inistas” gonna blame on Climate Change/AGW next?  The Civil War, maybe?  The Black Death?  The Chicago Cubs?  …Why not? 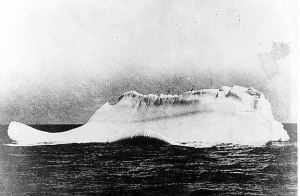 The photo of the iceberg that sank purportedly the Titanic. Credit: U.S. Coast Guard Historian’s Office

Kate Ravilious makes this nutty claim at The Guardian:

But in fact the catastrophe may have been set in motion by a warm, wet year over Greenland in 1908, resulting in greater snow accumulation. Writing in the journal Weather, Grant Bigg and David Wilton of Sheffield University explain how the snow soaked through cracks in the ice sheet, encouraging excess iceberg calving over the following few years. Soberingly, global warming has increased iceberg hazard greatly in recent decades, making years like 1912 more the norm than the exception.

Yeah, but have a look at what this research actually says and you’ll understand why The Guardian is nothing more than agitprop.

Another Obama Power Grab: Hey, let’s spend $$$ we don’t have to “prepare” for Climate Change!

Just another day at the office for the despicable, power-hungry busybodies in the Obama Administration, also known as They Know Better, Inc®:

More on this story over at Bunkerville:

“…At a speech at Georgetown University  in June, Mr. Obama outlined executive  actions he would take to require  government and private industry to prepare for  the effects of climate  change.

Though laws dealing with the issue are often criticized by those who do not  ascribe to leftist environmental policies, this order is especially dangerous  because Obama completely circumvented congressional oversight in its  implementation.

The fiat decision, entitled “Preparing the United States for the Impacts of  Climate Change,” will have far-reaching effects on the lives of Americans,  despite mounting evidence that human activity has no measurable effect on the  environment.

END_OF_DOCUMENT_TOKEN_TO_BE_REPLACED

Why The #AGW Lie Persists

No one pulls apart the various lies and scams of the Global Warming Industry quite as well as our buddy, Cosmo.
Enjoy…. For years I’ve struggled with the fact that supposedly well educated scientists continue to believe the Anthropogenic Global Warming (AGW) lie and the State Run Media (SRM) continues to publish these lies without challenging the facts of the story.

There is ample evidence that show:

1 – The temperature data has been tampered with – see here and here.

2 – The mythical hotspot that would be the signature of the enhanced Greenhouse Effect due to increased levels of CO2 hasn’t been found – see here and here.

3 – The Global Climate Models that are revered as holy by the AGW cult haven’t predicted or explained the lack of warming we’ve experienced for the past 15 years – see here and here.

4 – Antarctic Ice is expanding and the AGW cult can’t seem to wrap their minds around it – see here.

END_OF_DOCUMENT_TOKEN_TO_BE_REPLACED 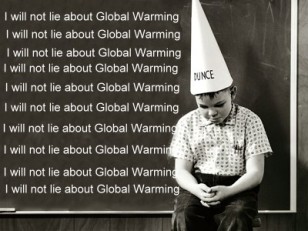 END_OF_DOCUMENT_TOKEN_TO_BE_REPLACED

Of Plastic Bags and Bondage (or, “How I learned to Stop Worrying and Love the Bag”)

The ubiquitous plastic bag, found everywhere from grocery stores to Best Buy, is in the news again.

First of all, it seems that the Washington Post has endorsed a proposed “plastic bag tax” in Maryland, which is designed to lessen people’s use and desire for the item.

However, it seems they left out one rather salient fact in their endorsement:

“….the Post failed to mention is that the bill, SB 576 — entitled the “Community Cleanup and Greening Act of 2013“ — specifically EXEMPTS plastic bags used to wrap NEWSPAPERS, an exemption which obviously favors the Washington Post company…”

Why, that certainly seems odd? I’m sure that the Post had NO idea that the exemption was even there…

Elsewhere, the former mayor of Solana Beach, CA, has decided to recant her previous allegiance to the War On Bags. Courtesy of 10news.com:

END_OF_DOCUMENT_TOKEN_TO_BE_REPLACED

This article comes to us via our friends over at “QUIXOTES LAST STAND” blog, and also from the Idaho Press Tribune. Written by syndicated columnist Susan Stamper Brown, it’s a brief-yet-effective history lesson to combat the Greenie-Weanies and Gaia worshippers among us.

We’ve mentioned this topic before, but this is one of those conversations that isn’t going away anytime soon. There are too many folks whose life’s animating force is seeing to it that I don’t use my air conditioning and that my wife no longer can buy her inhaler.

If there was ever a case to be made for global warming, it would have been in 1936 — back in the days when no one worried about how cow flatulence or greenhouse gas affected the atmosphere.

Unlike anything we’ve experienced since, the three-month long 1936 North American heat wave wiped out crops and snuffed out lives during the Great Depression’s “Dust Bowl” days. The heat wave that began in June largely ended in September, leaving in its wake over 5,000 deaths, drought and widespread destruction. Even as hot as it has been, many of the record-high temperatures experienced then are unmatched today.

To make matters worse, the 1936 heat wave was preceded by one of the most severe cold waves of the 1930s. The 1936 North American cold wave included recorded wind chills of minus-100 degrees Fahrenheit in the Midwest, ending with March floods. People concentrated on how to put the next meal on the table rather than obsessing over things like air temperature fluctuations.

It’s good they didn’t obsess, because temperatures returned to normal that fall, just like the cold front making its way across the country is doing today as I write.

Every time I read a breathless article from an enviro-nut, or see a new dictate from the EPA, I am astonished anew at the hubris of these folks. We can’t prevent hurricanes or tornadoes, we can’t make it rain in a drought, or warm when it’s cold. Who are they kidding? And even when we DO screw up, nature always manages to deal with it:

It’s funny how nature has a way of rebounding all by itself. The BP Gulf Oil Spill illustrates this “God Factor” in contradiction to everything alarmists believe. A most informative Jan. 10, 2011 Time Magazine article, “After the Great Spill: How the Gulf Cleaned Itself” explains how it did just that when “microscopic bacteria” digested “much of the hydrocarbons while they were still deep under the surface.” Texas A&M University chemical oceanographer John Kessler said the spill “helped us understand the capacity of a natural system to handle this kind of event by itself.” Wow.

Kessler’s study also found formally “significant amounts of methane” scientists thought might impact global warming and assumed “would be around for years” had “largely disappeared” when “methanotrophs (bacteria that feed off methane)” mopped up most of the mess.

Reasonable stewardship of the planet is a non-partisan no-brainer, but there is a line to be drawn at the point where choices inflict indelible injury on mankind — making man subservient to the very things created to serve him.

No one is preaching that we waste energy or resources wantonly, or is suggesting we wreak havoc and destruction throughout the wilderness just for a lark. But we have the highest standard of living on the planet. The poor in other countries would beat you senseless to be “poor” here. Even during our recent economically-lackluster years, that continues to be true.

With this, as in so many other areas, we are simply looking for balance. And however you wish to define it, balance most definitely does not mean “making man subservient to the very things created to serve him“.

They can Hear, but they don’t Listen

Summer will be starting soon, but I’ve already seen the first official sign: The season’s first Global Warming articles, one of which by Tom Junod in Esquire. I refuse to do them the favor of a link to it; look it up if you desire.

In the article, the author disingenuously argues that not accepting liberals’ full-throated belief in Global Warming is because we are stupid, closed-minded, Bible-clinging nuts. It’s snarky and dismissive of Christians in particular, which is 0% surprising coming from Esquire.

The first thing you’ll notice in the article is in evidence in most such posts: the conflation of the terms Global Warming, and Anthropogenic (man-made) Global Warming (AGW). In the article, you will not see the term anthropogenic. In much the same way that Liberals refuse to acknowledge the difference between “immigrant” and “Illegal immigrant”, or between “stem cells” and “Embryonic stem cells”, so too do they blithely skip over this rather essential difference concerning AGW. The point that the overwhelming number of skeptics keep making is we don’t know if there is warming, but even if there is, we don’t accept (since there is still no conclusive data) that MAN is causing it. It’s not a difficult theory to understand, so I’d call this willful ignorance, yet another case of the Libs sticking their fingers in their ears.

It’s a fact that we have been cooling for over a decade, which is why “Warming” was changed to Global Climate Change, and then again to Global Climate Disruption. And even a child knows we’ve had both very cold and very warm periods before. So if we are causing it now, what caused it BEFORE?

Let me know when they have a decent answer that doesn’t require falsified data to work.

Interestingly, when we have horrible winters (like the winter of 2010-2011), we are told “weather isn’t climate, you dolt”. But when a snooty Climate apologist wants to prove a point, he says something like Mr. Junod in Esquire:

“….Americans seemed finally to feel the heat — to look around at the storms, and  the floods, and the fires, and the droughts, and the rising food prices, and to  ask, What’s going on? It began with the Times reporting on global crop yields withering even as the global  population expands; it continued with Tom Friedman’s declaration that the earth (once Flat™) is now Full™; and  then ended with a report on the record temperatures recorded in cities from  New York to Chicago.”

Weather? You’ve been saying for years that weather WASN’T Climate Change, ….when the weather didn’t help your cause. Now, since summer and warm weather is ramping up, you point …to weather as an “obvious” indication of Climate Change/Disruption/Warming?

And you say that WE have a blind, religious devotion to our belief??

So, in the interest of being ‘fair’, it’s probably time to trot this out again. It’s satire, sure, but it sums up the argument far better than the authors even originally intended.

(**Video courtesy of our friends over at Quixotes Last Stand).