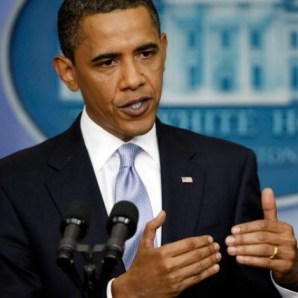 Just as he has for the past 5 years, President “YouCanKeepYourPlan” Obama believes that no matter what he says, as long as he says it over and over and over again, it’ll somehow magically come to pass. Or at the very least, that we’ll believe him just long enough for him to get his way.

That was an interesting if misguided theory at the advent of his tenure. But now, with the country trillions further in debt and no end in sight, it’s now more accurately to be considered either “dangerous” or “delusional”.

Honestly, I think it’s a toss-up:

Obama now parading victims of his terrible economy in front of cameras. As always, he’s really upset at whomever is president.

The people behind Obama should be holding empty gruel bowls.

If you’re unemployed, you get to spend time standing behind @BarackObama as a political prop, unpaid.

And there is Obama’s strategy in a nutshell: highlight a ‘victim’, play up the emotion of the situation, and then point to anyone who disagrees with “well, heck, we’ve gotta do SOMETHING…” as heartless monsters.

You can already guess who usually fills THAT role, I’m sure.

But as I originally said: Obama’s saying something repeatedly doesn’t make it so, and Ellison Barber puts the the easy lie to this charade:

Ellison is right, of course: extending Unemployment Benefits further, especially after five years of extending them, is a de facto admission of the Administration’s policy failure and is the worst sort of band-aid.

That’s not to say that people who don’t have jobs don’t WANT jobs; I’m 100% sure many, many folks DO. But that’s the problem: giving folks a never-ending check in lieu of a job doesn’t solve anything, but instead papers it over, allowing it to fester and worsen.

Hmmm, …interesting that Barack never seems to mention why these folks can’t find work, isn’t  it?

Obama’s willing to do everything to help the unemployed except admit his policies don’t create jobs.

It’s now beyond debatable that this practice doesn’t work. Feel free to follow Michelle Malkin’s link for evidence, if you require it:

It’s a FACT: Endless unemployment benefits reduce the incentive to get a job. http://t.co/8MYv5r1LZZ

The laugh line of the presser came near the end. With no hint of irony, Obama aimed for “inspirational”, and instead hit a bull’s-eye on “self satire”:

Despite all evidence to the contrary, I’m confident that we’ll continue to see committed Leftists like Obama, Valerie Jarrett and Nancy Pelosi continually praise Unemployment benefits as giving us the “biggest bang for the buck“, even as they castigate the nay-sayers.

But if that’s actually true, if giving our citizens something for nothing somehow mysteriously creates wealth and prosperity, doesn’t that lead to the most obvious of questions?

Why not put everyone on unemployment and create a true economic boom? #ObamaLogic

And before you laugh off that idea, just keep in mind: they’re actually talking about it.