(UPDATED) — Non-Union Utility workers “turned away” in New Jersey?!? (…And why THIS story is indicative of a much BIGGER issue)

Okay, I give up: what’s the difference? If you’re told not to come or if you’re turned away, unless you’re Unionized, …the phrase “distinction without a difference” comes to mind. As with previous updates, none of these developments disproves my overall point, despite the recent media spinnings of the IBEW.****

Utility crews from several states East of the Mississippi River hit the road this week to volunteer their time and talents in Northeastern states hit hard by Hurricane Sandy. But crews from Alabama got the shock of their lives when other workers in a coastal New Jersey town told them they couldn’t lend a hand …without a union card. 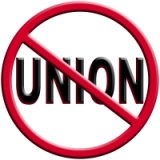 Derrick Moore, who works for Decatur Utilities in Decatur, Ala., told WAFF-TV in Huntsville that crews in Seaside Heights, N.J. turned him and his crewmates away, saying they couldn’t do any work there because they’re not union employees.

Following Hurricane Sandy, the “Frankenstorm”, New Jersey is by all evidence an EMERGENCY-DISASTER-HORROR-SHOW of EPIC PROPORTIONS, and they desperately need help ….but only if  you’re one of their “union brothers”.

WAFF’s Mark Thornton reported that Moore and his coworkers “are frustrated being told, in essence, ‘thanks, but no thanks.’”

Another non-union Decatur Utilities crew is idling in Roanoke, Va., waiting for instructions from Seaside Heights. The town asked them days ago for help, but later told the workers to stand down.

Electric repair work for public utilities in New Jersey is dominated by the International Brotherhood Of Electrical Workers, a unit of the politically powerful AFL-CIO.

Many parts of coastal New Jersey are projected to be without electric power for at least seven to 10 more days.

Nothing comes between some of these folks and their Union mindset.

New Jersey has citizens desperately in need of electricity, and more crews would make a HUGE assistance, yet they’re told, “….Darn, you’re not Union? Whoopsie! Well, our state doesn’t need the help THAT bad…”

I have years of experience dealing with Unions, including my immediate family, many friends, and it was even my major in college. As a result, I have NO doubt whatsoever that non-union teams could be told “we don’t need you; scram”.

RECENT EXAMPLE: in the Convention/EXPO Center where I’ve been this past week, we had a full display with hookups for both electric and air (for a compressor). The display itself was lightweight & designed to be assembled on site, like Lego blocks (no tools). As for the utilities, in order to use them you simply…plugged them in.

Quite literally: that’s it. No wiring, no wrenches, no nuthin’.

However, we were told a Union member would be over to help us “assemble” our display. Also, “an electrician would be over fairly soon to plug-in our items”. We also had to wait for a plumber to come “connect” the air line to our machine.

So, we couldn’t do/build/assemble anything (even though we knew how it went together, since it was ours, after all) until a Union brother came along to do it for/with us.

This obviously slows down the work that needs to be done to a crawl, which means the same amount of work will need more Union people to get it all done. Isn’t that wonderful?? Thus, the Union “wins”, and whomever is paying the bill loses, …BIG-time.

President Obama is fond of comparing the absence of Government involvement as being “on your own”, and portrays it as something to be avoided at all costs. Only the warm and fuzzy Federal Government can “keep you safe”. Unions spin the same story, about non-union labor. “Stay safe with us”, they say. “We’ll protect you”. In the meantime, they both suck dry the finances of those whom are actually footing the bill.

A truly Capitalist society is much more effective primarily because both of those things (Individual Common Sense, & Efficiency) are rewarded, rather than punished. President Obama is pushing us away from that model towards one that favors the inefficiency of the Union, coupled with government dependency and Cronyism (video explanation HERE, if you’re curious about that last one).

And all the while, we keep slipping further and further into debt.

We have a tough job ahead of us, ALL of us. But our nation can be turned around and heading in a positive direction fairly quickly, IF we choose properly. So the question you need to ask yourself is fairly simple:

Which future looks more promising to you?

20 responses to “(UPDATED) — Non-Union Utility workers “turned away” in New Jersey?!? (…And why THIS story is indicative of a much BIGGER issue)”