END_OF_DOCUMENT_TOKEN_TO_BE_REPLACED

The Daily Caller (Washington, DC): California Democratic Sen. Dianne Feinstein staged a dramatic press conference Thursday on Capitol Hill with 10 weapons at her side and unveiled legislation instituting a government ban on more than 150 types of firearms, including rifles, pistols and shotguns.

The legislation being pushed by Feinstein — who has long history of calling for gun bans — would prohibit the sale, transfer, importation and manufacture of certain firearms. 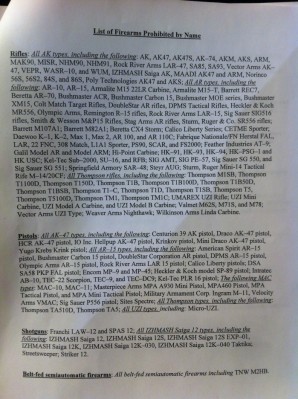 END_OF_DOCUMENT_TOKEN_TO_BE_REPLACED

(UPDATED) — Non-Union Utility workers “turned away” in New Jersey?!? (…And why THIS story is indicative of a much BIGGER issue)

END_OF_DOCUMENT_TOKEN_TO_BE_REPLACED

Since ‘livinrightinpgh‘ covered Voter ID  a few days ago, this article caught my eye. It is from The Daily Caller, so we’ll only take a piece of it, and direct you back there for the rest.

Criminal justice data shows that blacks and poor people are the most common victims of voter fraud and are the greatest beneficiaries of voter identification rules, according to a new study.

The courtroom evidence “completely contradicts the [progressive claim] that blacks, seniors, college students and other disadvantages groups are being victimized,” said Horace Cooper, an adjunct fellow at the National Center for Public Policy Research.

“The truth is … [that] the criminals — more often than not — are Democrats violating the rights of people who tend to be black or senior,” he told The Daily Caller.

A large investigation in Virginia, for example, showed that 30 percent of fraud allegations were centered in Richmond, which has the highest percentage of African-Americans in the state. In the state a wide investigation of voter fraud produced criminal charges against 38 people.

The new study damages progressives’ claims that the popular demand for voter identification laws mask a GOP effort to suppress the vote of racial and ethnic minorities who support Democratic candidates.

That claim has been central to a variety of Democratic efforts to block voter ID laws in critical swing-states, including Pennsylvania and Wisconsin.

Oh, the folks over in Eric Holder’s office will NOT be happy about this.

Check out the the rest over at  New Study: Voter ID rules protect seniors, minorities | The Daily Caller.

I just checked the news sites again, and this is up on FOX NEWS, HOTAIR, and the site where it originated, DAILY CALLER.

Now, before you say, “Dude, this really isn’t news, per se…” may I remind you of the many, many, many, many times that not only SNL but the late night comedians are dropped into the news reports (Sarah Palin, anyone?).

This IS news, or at least it should be.

The Daily Caller has obtained a scrapped sketch critical of President Barack  Obama that was intended for airing at the opening of last night’s “Saturday  Night Live” on NBC.

In the skit, President Obama addresses Americans soon after the first  anniversary of the killing of Osama bin Laden — and he makes sure to remind  viewers that all credit for the raid on the terrorist leader’s compound belongs  to him.

The real President Obama has faced harsh criticism in recent weeks for allegedly politicizing  bin Laden’s death by taking too much credit for the operation that killed  him.

Instead of the skit, NBC opted instead to air  a parody of Fox News Channel’s “Fox and Friends.” That skit, which also  featured Armisen, mocked Fox News personalities by portraying them as clueless  partisans.

Wait, wait, wait, …..you scrap a sketch that’s critical of Obama, and replace it with one of a Fox morning show? And the kicker: you portray FOX as being overly partisan? (Whoops, my Irony Alert™  just started to smoke…..)

The major Media is constantly trying to say that they have no bias when choosing how to cover news. Obviously, this is balderdash. Not only are they biased in what/how they cover news stories, they are even more biased in what they don’t cover. Case in point, just contrast the Tea Parties and Occupy Wall Street. Doesn’t get any more blatant than that.

Saturday Night Live is under no compunction to make fun of all celebrities/organizations/politicians equally. They’re a private show and can do what they want. Just don’t patronize me by saying, “We’re not partisan”.

At least one SNL alum is honest about it.

Nothing to see here. Move along…

I really had no intention of writing anything else today, but I kinda/sorta promised I would address this as soon as possible.

Earlier this week, while we were highlighting the overt media disparity between the Tea Party and the Occupy crew (It’s the Tea Party… Run For Your Lives!), commenter ‘a2buckeye‘ pointed out that the 5 men who were arrested for planning to blow up a bridge were likely associated with Occupy Cleveland. I deliberately skipped including it in my list of Occupy violence since enough facts weren’t yet known as to their Occupy kinship.

Well, more facts have come to light, and ‘a2buckeye‘ was spot-on.

The federal probe that resulted last night in the arrest of five  purported anarchists for allegedly plotting to bomb an Ohio bridge began last  year at an Occupy Wall Street rally in Cleveland that was infiltrated by an  informant who was directed to attend the event by his FBI handlers.

It was at the October 21 OWS event that the informant first met Douglas  [“Cyco”] Wright, 26, who reportedly confided details of his group’s planned  attacks “against corporate America and the financial system,” according to court  filings…

Wright eventually served as the informant’s bridge to the four other men  busted in the bombing plot–despite the fact that the quartet was “unsure” about  the snitch for whom Wright vouched. Of the five men arrested, four were involved  in the Occupy Cleveland movement, according to their Facebook profiles, a news  story, and a federal criminal complaint.

Predictably, Occupy Cleveland has tried to distance themselves from these cretins. Good luck with that. Jim Treacher points out the obvious connections, including:

“…..how did Brandon “Skabby” Baxter spend his time when he wasn’t plotting to murder people? He was organizing an Occupy rally. Last weekend.”

Make sure you read his whole post (complete with video), which will be, …uh, …’problematic” for Occupy Cleveland to dispute.

Gotta love those lil’ Occupy darlings. They’re so cute at that age.