Given a choice between #Obamacare and ‘JAWS’, …I’d take my chances with the shark:

A recent news article reminded me of one of my favorite movies, so please allow me to first show you the article, and then we’ll discuss the film.

“…The Obama administration is delaying another piece of Obamacare – this time postponing online enrollment in some of the small-business exchanges scheduled to open Oct. 1, sources tell POLITICO.

Small businesses looking to enroll in coverage on so-called SHOP exchanges run by the federal government will be able to submit a paper application on Oct. 1 – they just won’t be able to enroll online…”

Sadly, this wasn’t the first time. The Washington Times reported that as of September 11th, the President had already signed “…14 laws which amend, rescind, or otherwise change…” the Affordable Care Act. Which would make this latest change #15, unless a few more snuck in during the last couple of weeks.

Additionally, states are reporting they don’t even have the infrastructure ready to properly implement the health care exchanges when this national embarrassment is slated to begin October 1st. Plus, don’t forget that we’ve seen part-time jobs systematically replacing what were full-time jobs, and company after company dropping their employees’ coverage altogether, relegating those individuals to the government health exchanges, …some of which aren’t actually “functional”.

Let’s hear it for ‘Progress’!

And what is the White House’s reaction? How are they interpreting these manifest signs? Are they shelving the law, or even merely delaying it, horrified by their nightmare in the offing? 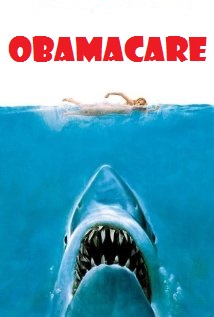 All of which puts me in mind of one of my favorite old movies, ‘Jaws‘. Recall, a super-sized shark was gobbling up Amity Island’s locals prior to the summer tourist kick-off. Aware they’d be effectively lining up swimmers as a beach-wide hors d’oeuvres tray, Police Chief Brody and marine biologist Matt Hooper repeatedly beg the mayor to close the beaches: they aren’t close to ready, and disaster is trolling their waters:

That’s pretty close to the situation we’re facing with Obamacare: we have a ravenous, indiscriminate monster approaching, which has already cost our country real jobs, money and opportunity. The exemptions which the President keeps passing out like candy are an implied acknowledgement he’s aware his precious law is fatally flawed. But even though the Administration insists these are all isolated occurrences, they’re not: they’re evidence, clear indications of the menace swimming just offshore.

The real problem is the law itself, and (as in the movie) unless someone kills it, the problem won’t magically disappear just because we close our eyes and pretend it’s not there.

Senator Ted Cruz did his best Brody/Hooper imitation during his marathon stem-winder, highlighting many of the defects in Obamacare: its deleterious effect on hiring and health care access, and on the number of people willing to become (or remain) doctors. He spoke about the immoral exemptions granted to both Congress and various White House pals, and the issues endangering full-time employment, …and the list goes on.

It was a bravura performance, but it will all be for naught if enough of us don’t stand with him, and insist that our Senators do, as well.

Because Obamacare is here, …and it’s hungry.

29 responses to “Given a choice between #Obamacare and ‘JAWS’, …I’d take my chances with the shark:”