Too bad to be true.

That’s how it felt.  All a bad dream, a nightmare, and they’d wake soon.  But when two nights passed and they’d cried themselves dry, they got up and chose to be practical.  Feeling empty, needing something to do, they gathered up the spices.  On the road, with the first golden beams of sunrise in their faces, they worried about the stone.  “Is this trip for nothing?  What if we can’t get in?”

Looking up, they see the stone.  “That’s not the way it…is this a trick of the light?  It’s been moved already. Who’s been here so early?  Nicodemus, maybe?”  Slowly they peer into the dark interior and see a patch of white.  The body.  No!  It’s sitting upright.  Their hearts pound now. “Not more bad news.  They haven’t taken His body, have they?  Is there danger?  Should we run?” And yet their feet keep moving forward.

The very words to strike terror to the core…now they are paralyzed. Who IS this?

“You’re looking for Jesus, who was crucified.  He isn’t here, He has risen!”

What?  What did he say?  Where is their Lord’s body?  Is this a cruel joke?

“Go and tell the disciples and Peter that He is going ahead of you into Galilee.  You’ll see Him there, just as He told you.”

“The Lord??  Is that what he just said?  We’ll see Jesus in Galilee?  Or did he say Peter was gone to Galilee, and we should meet him there?  He mentioned Peter, didn’t he?  I’m not sure what I heard.”

Is Jesus…alive?  Too good to be true.

But the tomb is empty. 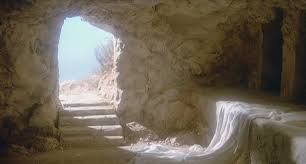 They look again, but the stranger is gone.  All they see are grave clothes, spread out flat on the stone slab.  Undisturbed, as though the body melted away from them.  Where is He?  Do they dare to believe?  They stumble backwards into the sunlight and find their feet running back towards the town.  In their hearts is dawning something warm.

This entry was posted in Christian, Meditations and tagged Easter, empty tomb, Hope. Bookmark the permalink.