Which is more culturally relevant: EASTER, …or Cesar Chavez’ birthday?

I hope everyone had a wonderful and blessed Easter.

My family and I enjoyed ourselves, hosting my sister-in-law’s family after morning mass, while I kept track of the NCAA Hockey tournament. However, only one little unnecessarily political event ruined an otherwise politics-free day, as my brother-in-law and I jumped on the web for a quick hockey update. 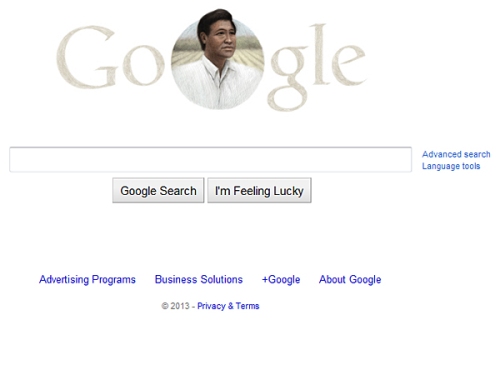 Yes, on Easter Sunday: a national holiday and special day of reverence for the overwhelming majority of Americans (both religious and secular), Google chose to make their daily doodle a celebration of the birthday of Cesar Chavez, rather than some sort of recognition of Easter.

And before someone starts saying that I’M being insensitive for thinking this is somewhat upside-down in the relative importance department, none other than Mika “Hard Lefty” Brzezinski even thought this was beyond the pale.

***FYI: When conservatives and the MSNBC ‘Morning Joe‘ crew say you’ve crossed the line, …it’s over.

MIKA BRZEZINSKI: “San Jose Mercury News: controversy surrounding the [sic] Google’s home page yesterday, when the company decided to pay tribute to Cesar Chavez instead of the Easter holiday. Sunday was the late California labor leader’s birthday. In a statement Google explained its decision, quote, we enjoy celebrating holidays at Google but as you may imagine it’s difficult for us to –“

BRZEZINSKI: “I don’t get this.”

MARK HALPERIN: “Not quite that long.”

SCARBOROUGH: “I think this is sort of one of those–I think this just might be a culture blind spot for our friends at Google.”

BRZEZINSKI: “I think they just screwed up. How about a statement one day that just says “we screwed up”? Who would have a problem with that?”

Just one more entry in the culture war which will likely fly under the radar of 95% of the country. But it’s exactly the kind of thing which needs to be noted and remembered whenever someone says no such war exists, and you’re being paranoid for thinking there is.

14 responses to “Which is more culturally relevant: EASTER, …or Cesar Chavez’ birthday?”