Ann Coulter vs. John Stossel and a room full of Libertarians (VIDEO)

This just showed up on HotAir, and Erika is right: this is like a cage match where you want to root for both combatants.

I come down more on the Coulter side of things, but I need to highlight one important point about the Libertarian youngsters in attendance. They are vastly different from your usual college-aged attendees in such a setting, in that for the most part they are very polite. Compare that to the majority of Planned Parenthood or Global Warming confabs at your local University, where the sights and sounds are NSFW, …at best.

Even though she’s outnumbered approximately 1,000-to-1, Coulter responds extremely well throughout (no surprise there). She’s a bomb-thrower, and doesn’t disappoint here; heck, that’s her career. However, she seems to relish these opportunities, and it would behoove the Republican Party to engage with Libertarians more often in this manner. At their heart, there are more similarities than differences between the two camps, and the sooner they both recognize that, the better. 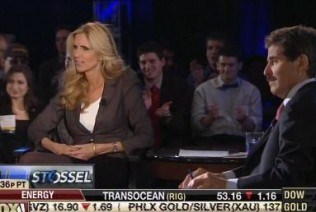 Ann’s best rejoinder, which she uses twice, is many (not all) Libertarians’ continual harping on the legalization of pot & gay marriage being in reality a sop to the Left, and I never heard anything from either Stossel or the audience that would dissuade me from that contention. Our nation needs to prioritize our problems, biggest to smallest, since we’re currently faced with so many truly intolerable issues. And I agree with Annie: neither of those two topics are among the thirty “most pressing” right now.

Heck, they probably aren’t in the top three-hundred and thirty.

But, make up your own mind. Stossel is always fun to watch, Coulter does what she always does, and it seems that everyone walked away from this with a better understanding of what they other is all about.

That counts as a ‘win’, for everybody.

16 responses to “Ann Coulter vs. John Stossel and a room full of Libertarians (VIDEO)”