Thanks to the Census Bureau, #Obamacare has a shiny new yardstick

Over the weekend, Politico said that Conservatives were “suspicious” of the White House over the following issue. But that’s wrong: we’re not “suspicious” in the slightest.

Suspicion indicates doubt, …and anyone with two synapses still firing should have zero doubts about this White House. 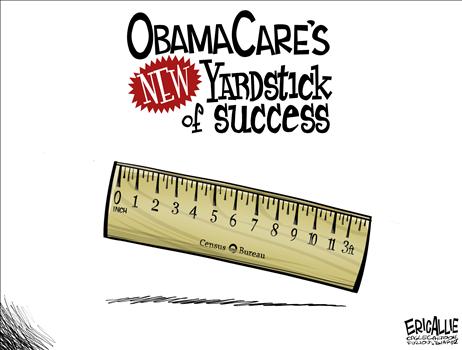 We mentioned the topic in a post last week, but with the Easter Holiday and vacation days, etc…, I’m guessing you might have missed at least part of this. So in addition to Eric’s perfect cartoon, we’ll also include a few links to what he’s referring.

And after you finish with all those, try not to scream at your computer when you read THIS piece from the Washington Post. Just to speed-up the process for you, the two most important sentences in it are as follows:

“…Until this year, the Current Population Survey asked people whether they had been uninsured at any point in the previous year. Someone uninsured [only] for the month of January, for example, was counted as uninsured for the entire year…”

As the Post unwittingly admits, that was a stupid and inaccurate way to measure folks who didn’t have health insurance, but regardless it was the method… until just now. But think about it: not only is the Census Bureau’s uninsured number going to look much better in comparison going forward (no matter what), it also means that it looked much WORSE in the past than it actually was, including throughout the entire debate about how necessary Obamacare was in the first place.

You remember why Obamacare was so necessary, don’t you? Because of all the “uninsureds” in the country.

8 responses to “Thanks to the Census Bureau, #Obamacare has a shiny new yardstick”