White House’s “transparency” is anything BUT….

We’ve just been told for the eight-hundred-and-fifty-millionth time: this IS the most transparent White House in history. Of course, if you don’t believe that, well, …you obviously have some modicum of common sense.

But neither of these are hurdles to the Obama White House and its Praetorian Guard, who seem to believe that through sheer repetition they can invert reality itself:

(via Real Clear Politics) – JAY CARNEY: “…I’ve covered the previous two administrations, and know a thing or two about ones before that, there has never been a more transparent administration. We provide more information about, for example, the WAVES [the White House “Workers and Visitors Entry System”] records, something that no administration has ever done. The WAVES records are collected by the Secret Service, individuals who are cleared in for White House access. Those have never been released before, no administration has ever released them. And I think it’s fair to say that the release of that information has made this White House far more transparent than any other…”

You’ve gotta love their OCD-ish dedication to this particular talking point: “We’re totes transparent, dammit!!” But apart from their most ardent followers, who’d buy this crap?

For example, it was only a few months ago that thirty-eight different news outlets sent a letter to this White House “protesting their shutting out of independent photojournalists in favor of taxpayer-funded official White House photographers“. In other words, Obama-&-Company’s continual use of staged propaganda photos finally offended even his own sycophantic Media flunkies.

A recent headline from the New York Times declared that “Census Survey Revisions Mask Health Law Effects.” But when you get into the article, it’s rather worse than merely “masking” something:

The Census Bureau, the authoritative source of health insurance data for more than three decades, is changing its annual survey so thoroughly that it will be difficult to measure the effects of President Obama’s health care law in the next report, due this fall, census officials said.

“We are expecting much lower numbers just because of the questions and how they are asked,” said Brett J. O’Hara, chief of the health statistics branch at the Census Bureau.

So, the White House grabbed control of the Census as soon as Obama became president in order to politicize the process, and now this is the result. Obamacare will be made more popular, you see, even if they have to corrupt the process by which it’s measured.

What about the Freedom of Information Act? FOIA requests are often used to measure how “open” an Administration is behaving at any particular time, so let’s take a look at how Obama’s folks are doing on that score.

In a 2013 Associated Press report, we learned that the:

“…Obama administration more often than ever censored government files or outright denied access to them last year under the U.S. Freedom of Information Act… 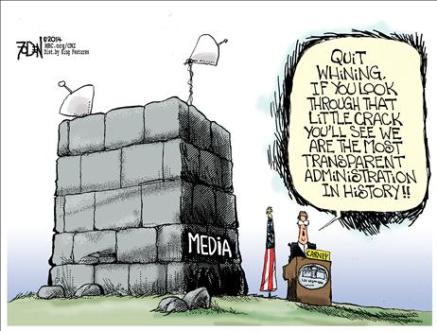 I suppose I should point out that the White House did receive an “award” for transparency back in 2011. And yet in typical fashion, they accepted it in …a closed-to-the-Media meeting at the White House. Really.

There’s more. Yet another report from March of this year revealed that:

“…Nearly half (50 out of 101) of all federal agencies have still not updated their Freedom of Information Act regulations to comply with Congress’s 2007 FOIA amendments, and even more agencies (55 of 101) have FOIA regulations that predate and ignore President Obama’s and Attorney General Holder’s 2009 guidance for a ‘presumption of disclosure,’ according to the new National Security Archive FOIA Audit released today to mark Sunshine Week…”

And as reported in the Washington Post, we had this:

“…the Center for Effective Government released its annual government-transparency report card on Monday, handing out failing grades to seven of the 15 agencies it reviewed. The scores are based on three metrics: processing requests for information, establishing rules for answering requests and creating user-friendly Web sites…”

And simply in the name of irony, I have to include this from the other day:

(via the IJReview) –  “…In a profile of Press Secretary Jay Carney appearing in the magazine Washingtonian Mom, this photo of the loving family appears:

And although every picture from this particular White House is 100% staged, this was worse. MUCH worse:

“…as savvy Twitter users noticed almost immediately, the picture is photo-shopped, and not very well at that…”:

(via Weasel Zippers and Katherine Branwen)

Now, apart from the obvious ridiculousness of this (I especially love the “floating kid’s finger” which results from one of the duplicates), there’s more to consider.

Or maybe there was just …nothing? Empty shelves would look kinda lame, I’ll admit. I hate to speculate, actually, but it’s their fault: they didn’t do it for NO reason, after all.

So by all means, guys, continue carping on about how gosh-darned “transparent” y’all are. 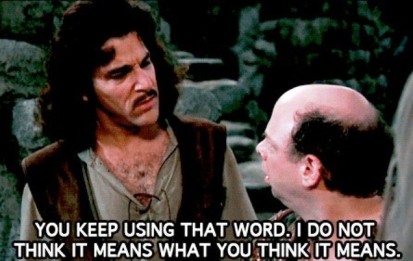 Keep it up. Seriously.

But trust me on this one: it’s not having quite the effect you were hoping for.

3 responses to “White House’s “transparency” is anything BUT….”