President Perfect changes the #Obamacare rules (again), to protect Congress and its staff

Coming down to crunch time, and Cruz is starting his filibuster in the Senate. Take just a moment to read the following post, and refresh your memory on just how thrilled our loving overlords in DC were to be living under the same laws as us “commoners”.

I may be sick…

A few days ago, we had put up the following post:

In it, we detailed how the staffs for both congressional and committee leadership were exempt from Obamacare, and how that was causing some consternation on Capitol Hill among everyone else’s staff.

Well, have no fear: Obama is here!!

From Politico, via Erika at HotAir:

The Office of Personnel Management, under heavy pressure from Capitol Hill, will issue a ruling that says the government can continue to make a contribution to the health care premiums of members of Congress and their aides, according to several Hill sources. …

END_OF_DOCUMENT_TOKEN_TO_BE_REPLACED

Islam: “They can’t keep taking offense at EVERYTHING”

The quote in this post’s title were the last words spoken by Mark Steyn in the interview below, …back in September of 2007.

This has been coming for a while, folks.

This week’s disgraceful events in the Middle East, and the even more disgraceful coverage by our Eunuch Media, made me pick up one of my favorite books of the last decade, ‘America Alone‘.

I’m sure many of you have either read it, or have at least heard about it and have MEANT to read it. Regardless if you fall into either of those two camps, or if you are in camp #3 (never read it &/or never heard of it), I’m asking you to do yourself a favor: please read it now.

His book (penned in 2006) is almost eerily prescient, and all the while Steyn is waaaay funnier than that Nostradamus guy. And make no mistake, being funny is what makes you read the whole thing, because the subject matter is depressing. It warns us of the threats of radical Islam, as well as its enabler, multiculturalism.

The combination is dire.

If you want to have your eyes opened to the reality that slapped us in the face (again) this week, this is the book to read. Where else are you going to get a world-class briefing on one of the most imminent dangers of the 21st century, and still average at least one good belly laugh per page? No where else, I assure you.

In addition to the 1st clip at the top, I’m also including a 2nd one below, this time with Steyn discussing multiculturalism. In the 2nd one he’s working without a script in front of a live audience, where he truly excels.

But after you watch the videos, don’t forget to grab/buy/rent ‘America Alone‘. Not reading it now would qualify as being willfully ignorant, and that is something we no longer have the luxury to be.

Steyn on The Daily Caller

I confess: I love Mark Steyn.

No, no, no…..I’m not cutting out his picture into heart shapes, or stalking the man in parking lots; nothing like that.

I simply mean he’s the funniest and most prescient author/pundit around. He’s like Bob Newhart in his heyday, but with a British accent and a politically conservative bent.

If you haven’t heard him or read him, I’d initially pick up America Alone. Published in 2006, it’s even more relevant now than it was six years ago. It’s simultaneously “laugh-out-loud funny” (that’s a quote from Amazon.com, but I completely agree), and depressing. He may have penned it using a time machine, since so many of his concerns have already begun to occur.

Anyway, please check out Steyn’s latest interview with Ginni Thomas on DailyCaller.com. It’s roughly 20 minutes long, but well worth your investment of time.

*By the way, if you want to see the full list of his books or read some of his current writings, go here.

**And if you want to hear him in more of a speaker-&-audience setting, this clip is a good place to start. 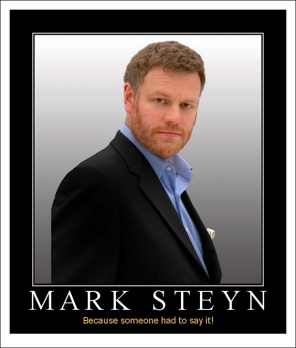