Tough Parenting Choices Make Us Think of the Ultimate Parent

Ric Runestad is a resident of Fort Wayne and an occasional guest editorial writer for our evening paper, the News-Sentinel. I opened to the editorial page on Thursday and read a remarkable piece of apologetic–a really fresh response to the timeless question of “Why do bad things happen to good people?”

You can read the entire piece by following the link. I’ve reprinted a slightly abridged version, along with a follow-up thought I had about it.

[Not knowing how to contact Mr. Runestad directly, I can only hope that he won’t mind.]

Without preamble he began. “I represent a company that wishes to make you an offer. A ‘bargain’ we will call it. This new child of yours is just what we are needing for an experiment.

END_OF_DOCUMENT_TOKEN_TO_BE_REPLACED 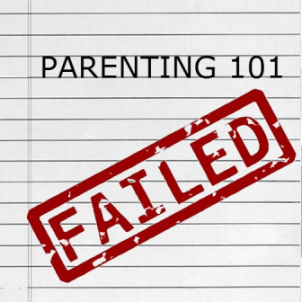 Call me judgmental, but I think there’s a larger problem here:

(via Yahoo! News) – “…Authorities have charged a northern New York woman and her boyfriend because the woman’s 2-year-old daughter used their cellphones to dial 911 a total of 15 times last month.

Village of Lowville Police Officer Matthew Martin says the 23-year-old mother and her 33-year-old boyfriend told him they tried to keep their phones away from the persistent toddler, but the girl kept getting them and dialing 911.

As the father of two (now teenage) boys, I gotta ask: fifteen times? Fifteen? Am I the only one who’s trying to figure out how this is even possible??

END_OF_DOCUMENT_TOKEN_TO_BE_REPLACED

Are we Protecting our kids, …or Failing to Prepare them?

If today’s children truly are the leaders of tomorrow, we are going to have the most passive, ossified leaders in the history of the planet.

It’s no secret that the tree-climbing, BB-gun-shooting, rub-some-dirt-on-it ways of past generations bear no resemblance to today’s bubble-wrapped youth. Trying to eliminate pain of every kind, both physical and psychological, has resulted in a society where no one is supposed to keep score (even though kids still do), and games like Dodge Ball are widely banned.

But is this really healthy? Didn’t we all learn how to get back up after we fell? Didn’t we learn how to take a punch, or play through pain? Didn’t we figure out that scraped-up knees and elbows were a reasonable trade-off for seeing how fast you can run, or how high you can jump? 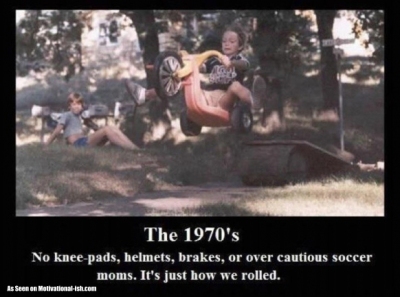 Not according to the risk averse, anti-fun squad otherwise known as today’s parents and educators:

END_OF_DOCUMENT_TOKEN_TO_BE_REPLACED

Teaching our kids the value of Good Character 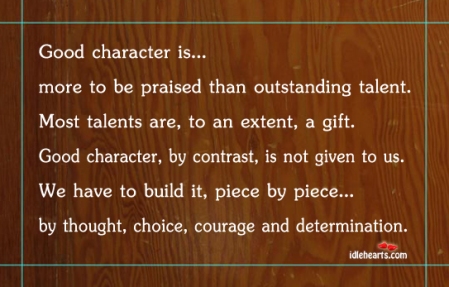 I’ve been telling my two sons the same message for their entire lives: my goal for them is that they grow up to be strong, kind, solid men of good character. And anything I do or don’t do is in furtherance of that goal.

As a result, both of them (ages 12 & 13) are presently strong, kind, good boys… so far. I’m hardly naïve, and well aware that with the gift of free will, they could one day make destructive decisions which upend all my and my wife’s hard work.

But I wouldn’t bet on that happening.

END_OF_DOCUMENT_TOKEN_TO_BE_REPLACED

“Good Enough” is not a useful standard 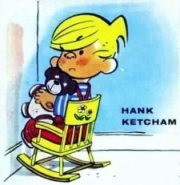 Among the pitfalls of Christian parenting, I know of none any trickier to navigate than moderating youthful behavior: I want my child to become obedient, and to obey the FIRST time I give the instruction or command. I want to be consistent in doling out consequences for failing to obey. But both parent and child are human, and we fall short. My granddaughter Lucy doesn’t always want to bend her own will to mine (surprise!!)–and her most stubborn moments sometimes coincide with my greatest fatigue…I am just too tired to want to follow through.

In addition, I am aware of not wanting to send the message that I demand perfection, or that her perfect obedience is required in order to receive my love (or God’s).  Neither Lucy nor I can ever be “good enough” to merit God’s favor. And He has made it clear through His Word that He loves us in spite of our faults. END_OF_DOCUMENT_TOKEN_TO_BE_REPLACED

A quick reminder about Social Interaction (via cartoonist Steve Kelley)

How many of us are guilty of this, even just occasionally? 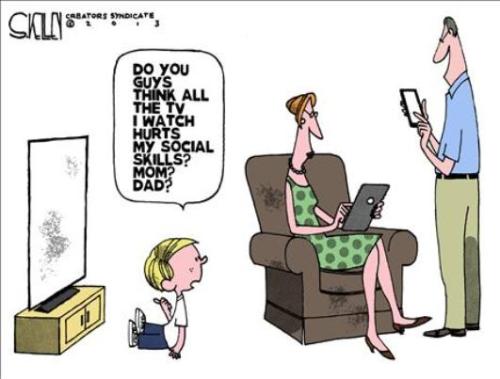 Just a little reminder, from one perpetrator to another…

Virtue or Vice: Setting an Example for our Children to follow….

What is wrong with our culture?

From the Associated Press, via WEAU.com:

Sgt. Jessie Metoyer says one of the employees, a 22-year-old Caledonia woman, is the mother of two of the children who physically assaulted the toddler. Metoyer says the three children held down the 2-year-old and punched and kicked him. Police say the video was taken by one of the two women.

The Caledonia woman and a 23-year-old Racine woman are each charged with child abuse by failing to prevent bodily harm. Both women appeared in court Friday and remain in jail.

When I first heard this, I didn’t know what to think. Punching and kicking a 2-year-old? And the daycare worker films it, and then posts it to Facebook??

END_OF_DOCUMENT_TOKEN_TO_BE_REPLACED

Courage for the Race Comes from His Presence

My sweet two-year-old granddaughter experienced her first bout of the stomach flu this weekend. She tried to tell me that she was in pain (which was obvious), but she had no words for ‘nausea’ or ‘gastric distress’. So she had to show me, by emptying the contents of her stomach onto my going-to-the-theater clothes.

No, baby. Mama definitely can’t go anywhere now. It’s not that Papa couldn’t take good care of you. But you want me, and I want you to know that you can depend on me.