A Tale of Two Unions: NFL refs and Chicago teachers

It’s no secret: I’m not a big fan of unions. So, please keep that in mind as I say the following: “Hey, NFL!!! Pay the darn Refs and bring them back”.

Because Monday night was ridiculous. 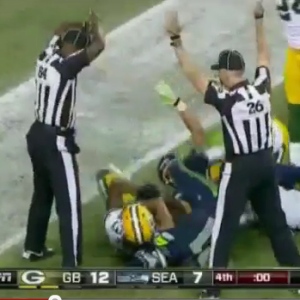 But before we get into the Packers/Seahawks football game debacle, we need to include some context:

Sometimes you have folks that you could replace with almost anyone. The recent Chicago teachers strike would be a fair example: based upon their students’ test scores, we could replace half of the existing Chicago Public School teachers with African Grey Parrots and the test scores would likely go up.

To be sure, all the teachers in Chicago can’t be bad. But obviously a LOT of them sure as heck are, and more than a few must struggle just to find their Home Room each day.

And yet, in light of these teachers’ overall colossal failure, the Union requested (and ultimately received) a 42% pay increase versus the last 10 years which would boost average Chicago teacher compensation into the $100,000 range. In addition, Windy City teachers received total wage increases of 19% to 46% during their 2007-2012 contract, depending on such factors as length of service, according to a fact finder’s report issued in July. 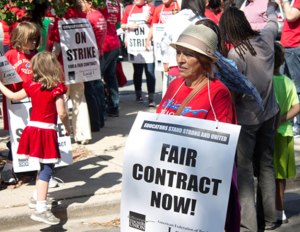 Just an FYI: that also makes CPS teachers among the highest paid in the nation. If you’d like a quick breakdown of how this all worked out so well for the union, here you go, courtesy of Reason.com:

Horrified? Good. So was I.

Now we can discuss what I mentioned at the beginning, because in the NFL, we have another union strike/lockout, but one which is decidedly different from the Chicago fiasco. It makes for an interesting, and frustrating, comparison.

First of all, check out Monday night’s NFL game as described by PJMedia. The Green Bay player clearly intercepts the ball, but the Seattle player battles him for it…after it’s caught and he’s down.

Now I’ll just borrow a couple of paragraphs from the L.A.Times article:

Three weeks of gross incompetence by unqualified replacement officials crystallized in two moments Monday night that pushed the league’s integrity to the brink.

In the next moment, the replacement officials ruled that Tate had made the catch, and upheld that ruling after replay review, giving the Seahawks a 14-12 victory.

It’s finally happened. After three weeks of forgetting the rules, losing track of the ball, and haphazardly administering this country’s national pastime as if they were salesmen on vacation from Foot Locker, the replacement officials have finally done serious, irrevocable damage. The arrogant NFL’s middle-school and small-college substitutes for the locked-out regular officials have finally, actually, literally made one wrong call that decided the outcome of a game.

This is a strike that, by all accounts, is ultimately about money (…..the refs want more. You’re shocked, I can tell). However, there’s more to it than that. In the case of the NFL refs, they make a nice salary for a part-time job, receiving about $149,000 (on average) in 2011. However, for that money, and especially as compared to the Chicago teachers, all-in-all they do an incredibly complex job pretty darn well.

All professional referees have to make split-second calls, on live TV, while mentally juggling a rules book that is starting to resemble the U.S. tax code. They also have to maintain control of the game, which is no small task in a sport filled with chiseled physiques, million-dollar egos and “prima donna” tempers.

And, what do they get for their efforts every week? They are castigated from one end of the country to the other. By way of comparison, Teachers are universally loved and feted. Referees? Any sports fan will tell you: the only 100% unifying thought in the stands is that EVERYONE hates the refs.

But please, everyone, stop yelling at the replacement guys, okay? The only people who truly AREN’T at fault for any of this are the rent-a-refs.  From day 1, they weren’t even partially prepared for this stage….and the NFL knew it. One day Joe Six-pack was refereeing some Division III schools (or even a high school) and the next day, he has to learn a new rules book while working games that are almost incomprehensibly faster, rougher and more physical than any he’s even imagined.

They were all set up to fail.

Both sides (the League and the Refs) need to get this done, but the League needs to step up first, in my opinion. There’s only a little over a hundred refs: pay ’em. They obviously do a job that no one is going to replace any time soon.

The referees are an essential aspect for the success of their industry.

Maybe someday, the Chicago Public School teachers will be able to say the same thing.