A solid post highlighting one of the MSM’s most ubiquitous narratives:

“there’s nothing wrong with our country that Taxing-The-Rich can’t cure”. 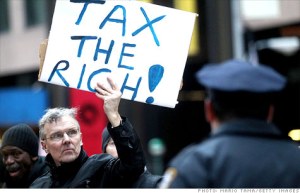 All statists want much bigger government, but not all of them are honest about how to finance a Greek-sized welfare state.

The President, for instance, wants us to believe that the rich are some sort of fiscal pinata, capable of generating endless amounts of tax revenue.

Using IRS tax data, I’ve shown that this is a very inaccurate assumption. And I’ve also used IRS data to show the President that there are big Laffer-Curve effects when you try to rape and pillage high-income Americans.

Heck, even the Europeans have realized that you can only squeeze so much blood from that stone.

Notwithstanding the misleading rhetoric from the Obama Administration, there are some honest folks on the left who understand and acknowledge that you can’t have bigger government unless you put ordinary people on the chopping block.

Remember this, from Animal House?

Well, you’re gonna hear the Liberal/Democrat version of that for the next 5 months.

Americans’ confidence in the economy suffered the biggest drop in eight months as worries about the weak jobs, housing and stock markets rattled them again. The decline comes after a few months of optimism amid some positive economic news.

The Conference Board, a private research group, said on Tuesday that its Consumer Confidence Index now stands at 64.9, down from a revised 68.7 in April. With gas prices falling, Americans were expected to push the measure to 70, according to analysts polled by FactSet.

But the May figure, which represents the biggest drop since October 2011 when the measure fell about 6 points, shows that consumers need more encouraging economic signs before their concerns start to dissipate.

Sort of like a kid learning to eat their peas, the American consumer just needs the right ‘encouragement’ and then their irrational economic fears will be all better.

Compare that headline with this headline from the NY Times:

Doing the Associated Press one better, the Times ignores the report AP used and quotes from a different report which totally contradicts the AP’s, and says that Consumer Sentiment (sentiment…?) “rose to its highest level in more than four years in May as Americans stayed positive about the job market”.

Curiously, when you review the same report that the Times uses for its headline you find THIS fact, which actually appears prior to their data point:

But remember: “All is Well“.