Pretend for a minute that a video existed which showed out-of-control, right-wing, Conservative Republicans with their faces hidden by masks and bandannas. Pretend they were all screaming, cursing and basically behaving like your average Muslim Brotherhood supporters.

Not just audio, mind you: VIDEO. 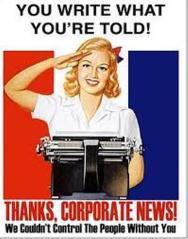 Is it any stretch of the imagination to assume that such a video would be shown on every News Channel, every 20 minutes, …PLUS Comedy Central, …PLUS all the daytime shows?

Such a video DOES exist, …but since it concerns folks on the Left behaving like animals, the media has immediately begun channeling Marcel Marceau, and thus we don’t hear so much as a peep from them.

The following story springs from Wisconsin, a state which has already seen more than its share of crazy Lefty activity in the last couple of years, as you might “recall”.

Thanks to legislation signed by Governor Scott Walker this year, there’s an open-pit iron mine being developed up in northern Wisconsin. Since this will provide resources, jobs and be a general boon to the economy, NATURALLY the Left has a visceral hatred for it and wants to shut it down immediately.