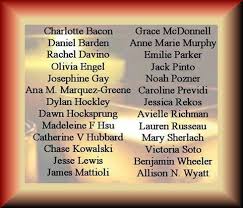 “A voice is heard in Ramah, weeping and great mourning, Rachel weeping for her children and refusing to be comforted, because they are no more.”           Matthew 2:18 NIV

This has all happened before. Innocent children’s lives snuffed out at the hands of a madman in a small town. No warning; no mercy. Only savage slaughter.

We can piece together the reasons, after the fact. Jealousy, revenge, anger, irrational fear, despair. None of these words ameliorates the crime.

Explanations are not comforting and offer no acceptable excuse. END_OF_DOCUMENT_TOKEN_TO_BE_REPLACED

Wednesday night was this election cycle’s first debate between President Obama and Governor Romney, and I’m struggling for ways to place it into historical context for comparison:

This was a massacre so complete, the CNN & MSNBC crews were both in full freak-out mode immediately as it ended. What else can you call it when you have James Carville saying, “Mitt Romney came in with a Chainsaw?”,  and Chris Matthews is spitting the words, “What was Romney doing? He was winning”.

They saw what I saw: Romney was warm (yes, warm), highly prepared, and had an almost unnatural grasp of the facts and data. He was respectful of the President without being obsequious.  Romney didn’t miss a step the entire night, and you could tell he was enjoying himself out there.

Conversely, Obama looked like the guy who can’t decide what to order on the menu.

I admit: it was awfully entertaining.

On Twitter, the best lines were coming from the pros, and no one was enjoying himself more than Dennis Miller:

Romney keeps this up Obama's gonna vote for him.

Obama is taking on water in all front four compartments. He's listing…Bruce Ismay is dressing up as a woman.

Romney is stomping him like a narc at a biker rally.

Obama better hope a Kicked Ass is covered under Obamacare.

However, I’d be remiss if I didn’t include these two instant classics:

That wasn't a debate so much as Mitt Romney just took Obama for a cross country drive strapped to the roof of his car.

Now, if you somehow missed the excitement last night (and if you did, seriously: what were you thinking?!?), here’s the debate, in its entirety:

And, last but not least, there’s this:

In CNN’s flash-poll last night, there was one stat that trumps all the rest (and the rest are pretty good, too): among the Independent voters polled, Romney juuuuust nudged past Obama by a 75-17 margin.

This is all about momentum; nothing’s been decided yet. But, in a race that is statistically tied, a complete drubbing plays into the psychology of both the candidates and the voters. No question: there were some fence-sitters who are now firmly on the Romney/Ryan side after last night.