No one, and I do mean NO one, does political satire today quite like ReasonTV’s Remy. His efforts this time combine two major recent headlines, and he makes an inescapable (and deeply troubling) point.

END_OF_DOCUMENT_TOKEN_TO_BE_REPLACED

Are you familiar with the term “retconning”?

It stands for “Retroactive continuity“, and basically means when a previously established fact(s) is altered in the continuity of a fictional work. Retconning happens in movies, TV shows and comic books all the time, especially when the writer wants to unmake something that’s already happened, like if a character died and they want him/her back.

Because you can’t “retcon” reality.

And yet what else can you call this?

END_OF_DOCUMENT_TOKEN_TO_BE_REPLACED

Oh, yeah: all those problems with #Obamacare? The Lies? It’s TOTALLY the fault of …Republicans.

(via Mary Katherine Ham at HotAir.com) – “…You have a friend who is a lifelong couch potato with diabetes and a heart problem. He declares his intention to run a marathon with no training whatsoever. You advise him against this, fearing he won’t be able to handle it and hurt himself.

He runs the marathon, almost dies at Mile 16, and then blames you for not carrying him 26.2 miles.

This is the GOP’s obligation to Obamacare, a law it had no hand in passing because it was afraid of exactly this meltdown. …”

END_OF_DOCUMENT_TOKEN_TO_BE_REPLACED

Golly, who could have seen this coming?

END_OF_DOCUMENT_TOKEN_TO_BE_REPLACED

The #Obamacare Exchanges: made-to-order for Fraud and Abuse

This week a news report from CNBC raised some eyebrows, as it highlighted the likely risk of fraud and abuse in conjunction with the implementation of Obamacare:

Scammers have been at it for more than a year now, but consumer advocates and security experts warn that the problem will worsen as we get closer to Oct. 1. That’s when the millions of uninsured Americans can use a health insurance exchange, set-up by their state or by the federal government, to shop for coverage.

END_OF_DOCUMENT_TOKEN_TO_BE_REPLACED

The coming Horrors of Obamacare…

An excellent overview of the coming disaster which is Obamacare. We cannot, we MUST not, meekly “accept” it….

Newt Gingrich said it first: we’re going to need a ton of new doctors to accommodate the demands of Obamacare.

Quiner’s Diner is spending time on Obamacare this week because it is a reality. Last week’s election results suggest it will be around for awhile.

The reality, or perhaps unreality would be a better word, of Obamacare is setting in. For example, we’re not going to have enough doctors to do all the things the law demands.

A key point of Obamacare was to get more people health insurance. Some 42 million were uninsured depending on who you listened to. Obamacare won’t get them all insurance, but more will be insured.

It gets worse. It requires a long list of “free” preventative screenings in health insurance plans. To name a few … 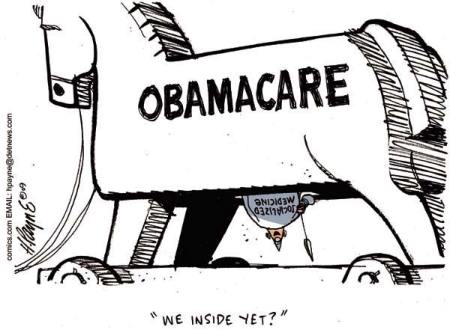 END_OF_DOCUMENT_TOKEN_TO_BE_REPLACED

Just got back from vacation……..and really don’t have time (or energy) to post anything today.

Have a good Wednesday, and we’ll be back to normal tomorrow.