An Obliquity by any other name…

Regardless of where you live, you are paying a ridiculous amount for gasoline, and there appears no end in sight. Certainly not when President Genius sputters such inanities as “With only 2% of the world’s oil reserves, we just can’t drill our way to lower gas prices”.

This is pabulum, yet it persists.

I had as clients a couple of geologists whose job was coming up with the calculations for where to drill for oil and natural gas. Great guys. They were of one mind on this point: the US has as many or more natural resources per square mile of territory than any other country in the world. We are blessed with them. The problem is that we deny to ourselves their very existence and then lie about the reason.

Take the President’s words above. Only 2%? Really? By saying that, he is being deliberately duplicitous (read as: he’s fibbing).

By “reserves”, he undoubtedly is referring to “proved reserves”, which only counts oil that companies are currently drilling for in existing fields.

How much recoverable oil does the U.S. have in addition to the 22.3 billion Obama had in mind? Start with the Green River Formationin Wyoming: 1.4 trillion barrels—sixty-two times as much as Obama counts.

After Green River, it’s almost embarrassing to count other sources: 86 billion on the outer continental shelf; 24 billion in the lower 48; 2 billion on Alaska’s north slope; 19 billion in Utah tar sands; 12 billion in ANWR. Then add in oil shale: 800 billion just in Wyoming and neighboring states. As IBD sums it up: “When you include oil shale, the U.S. has 1.4 trillion barrels of technically recoverable oil, according to the Institute for Energy Research, enough to meet all U.S. oil needs for about the next 200 years, without any imports.”

They even include a handy-dandy graph to depict more accurately what our actual energy situation looks like: 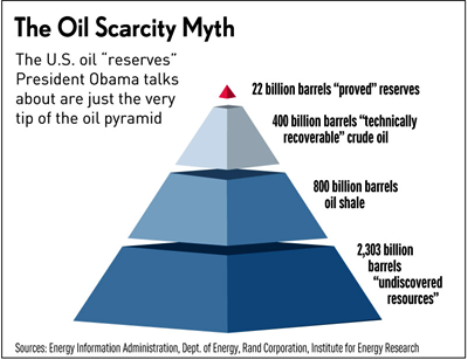 “But, but, but, ….oil is priced on the world market”, they say, which is certainly true. But when more gas, or just the promise of more gas, enters the market, that changes the equation drastically. Then again, that is what the futures market does. It looks at what the energy demands and supply might look like….in the future. And, since we can’t control what the Middle East does with their oil supply, why wouldn’t we try to insure against any potential disruption by maximizing ours?

Additionally, if we are developing more resources here, producers will look to sell it where they can make the most profit. Given that there is one worldwide price and assuming that there is demand for it in the US (a relatively safe assumption), they stand to make more money selling as much as possible locally, rather than, say, in China.

In honor of my old algebra teacher:

Obama knows all this, of course. He is quite aware that he is giving a deceptive view of our energy capabilities. The probable answer to the question, “why??” is that he wants to give the impression of scarcity in order to make the case for wind, solar and other largely unviable means of energy.

Paradoxically, he has also made the following claim:

As I try to teach my boys, when you only tell part of the truth, it still amounts to a lie.

The president did not paint an accurate picture of America’s energy reality on oil. Last year’s increase in domestic oil production is entirely a product of decisions to encourage new production that were made several years ago, in previous Administrations. The reduction in the percentage of oil we import occurred due to these previously-approved permits, as well as lower U.S. oil demand due to our weak economy.

The next big thing in energy will eventually come around and when it does, I’ll be one of the first in line. Until that day and then, only if it can compete on the open market, not developing as much of own energy as humanly possible makes as much sense as playing a hockey game where you only play defense and never take a shot:

You can only, inevitably, lose.