“Is Evil Rational?” — via @DennisPrager

There is so much wrong with the world, and too often I glibly speak of its “madness” or “irrationality”…but no more!  Five minutes of Dennis Prager‘s lucid speech reminded me of what I knew already…most of what’s wrong in our world has little to do with insanity, but everything to do with evil.

Invest five minutes in a clearer perspective this morning:

END_OF_DOCUMENT_TOKEN_TO_BE_REPLACED

Got your attention, didn’t I?

I just watched a Prager University video featuring Professor Peter Kreeft of Boston College. Professor Kreeft happens to be one of my favorite philosophy/logic/theology writers, so I was happy to watch his brief lecture.

I think you’ll appreciate it, too:

END_OF_DOCUMENT_TOKEN_TO_BE_REPLACED

Failing to accept the TRUTH about the #MiddleEast:

Do you remember this old Obama quote?

“…Now it’s our moment to lead – our generation’s time to tell another great American story.

Hmmm,….  How’s that coming along? Let’s take a peek at a few items from the region:

END_OF_DOCUMENT_TOKEN_TO_BE_REPLACED

Dennis Prager: “It’s as if they NEVER existed….”

An age-old debate between guys and gals is the way men are wired (visually) vs. women (NOT visually).

Lord knows I’ve had this discussion with my beautiful, smart, funny and generally incredible bride of almost twenty years…, and I’m guessing most married/engaged guys have had it, too. Since it’s the middle of summer, and folks are going to the beach, etc,…, this is as good a time as any to review the subject.

Dennis Prager masterfully covers such topics in his live appearances and on his radio show, especially during the “Male/Female Hour”. Using equal parts humor and common sense, Dennis can be trusted to get past various misconceptions, and pull out the truth of the matter.

My favorite part of his video (below) is when Prager says:

END_OF_DOCUMENT_TOKEN_TO_BE_REPLACED

For the gazillionth time: “Freedom OF Religion” is NOT the same thing as “Freedom FROM Religion”

The Separation of Church and State may be one of the most deliberately misrepresented and (sadly) misunderstood foundational aspects of our nation today.

All together now: there is a Sistine Chapel-sized difference between the terms “Freedom OF Religion” and “Freedom FROM Religion”. We’ve certainly talked about this subject here before, but further examples of secular intolerance keep popping up with a weed-like persistence. And since they won’t stop, neither will we.

The most recent example is courtesy of the Washington Times:

Atheists are outraged that a Bible sits right next to the mayor’s desk, inside a Pinellas Park City Council chamber, and they’re demanding its removal.

City officials, however, say that’s a no-go. The Bible’s been there for more than 30 years, and laws don’t prohibit its presence, The Blaze reported. The book was an Oct. 19, 1975, gift to council members from the Kiwanis club, and it’s been a traditional fixture ever since.

Freedom From Religion Foundation officials say they don’t care. They sent a letter to city officials, saying the Bible needs to go because it violates the principle of separation of church and state.

“It’s on display. And that certainly is improper,” said president Annie Laurie Gaylor…

END_OF_DOCUMENT_TOKEN_TO_BE_REPLACED

The State vs. the Individual

But in light of the overwhelming amount of State Sanctioned, tyrannical behavior cascading from the White House recently, it seemed appropriate to revisit this line of thinking.)

I was re-reading an old article by Dennis Prager called “The Bigger the Government, the Smaller the Individual” and I was struck at the wisdom of that phrase. It made me think of the many things which we’ve covered here over the past few months, certainly, but it also reminded me of several other items I’d recently seen and how Conservatism (both political & religious) is connected by that singular concept.

END_OF_DOCUMENT_TOKEN_TO_BE_REPLACED

Take the test: “Are you a Liberal?”

As I’ve mentioned several times before, I was raised in the extremely liberal conclave of Massachusetts. As a result, for years my opinion of Liberal ideals was exactly as Dennis Prager enunciates in his video at the bottom: to be “liberal” was synonymous with being kind, compassionate and open-minded. To be otherwise marked you as some despotic amalgamation of The Simpsons’ Mr. Burns and Attila the Hun.

It wasn’t until after I graduated and escaped from New England (many years ago now) that I discovered what Conservatism even was, and that many, many people whom I knew were not, in actuality, liberal at all: they just thought they were. 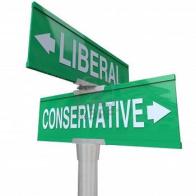 I had the opportunity over a long career in sales to flesh-out this discovery, since during interviews the conversation would often come around to politics or current-events. It was then that I found countless folks who’d voted for liberals consistently,  even though their own personal beliefs and values ran counter to those politicians’. Why? Because they’d been fed the same line that I had: liberal was “good” and “kind”, so to not be liberal meant the opposite…and who wants to think themselves NOT “good” or “kind”?

END_OF_DOCUMENT_TOKEN_TO_BE_REPLACED

The State vs. the Individual

I was re-reading an old article by Dennis Prager called “The Bigger the Government, the Smaller the Individual” and I was struck at the wisdom of that phrase. It made me think of the many things which we’ve covered here over the past few months, certainly, but it also reminded me of several other items I’d recently seen and how Conservatism (both political & religious) is connected by that singular concept.

For example, J. E. Dyer had a post on her Patheos blog that concerned the rightful role & scope of  government. Below is the primary thrust of her fairly lengthy piece: