We’re used to every sort of villain in movies: monsters of all types and descriptions, along with a plethora of serial killers, ghosts, pirates, vampires, gangsters, aliens, … It’s a lengthy, legendary list.

But the (seemingly) most benign Bad Guys ever were brought to the screen by Alfred Hitchcock in The Birds.

Although Tippi Hedren, Rod Taylor, Jessica Tandy, and Suzanne Pleshette all ostensibly star in this movie, to me the REAL stars will always be the title characters themselves: the birds, …and the unearthly sense of disquiet (or sheer fright) that they elicit.

Think about it. We see our avian friends constantly, all day long: at work, at home, and everywhere in between. That’s because the current human population of the United States is about 320 million, a number which pales in comparison to the estimated 10-20 billion birds with whom we are co-residents, and the 200-400 billion birds which exist worldwide.

We’re totally, utterly outnumbered. And yet we aren’t concerned, because birds aren’t dangerous.

By design, the “why” of the birds’ suddenly lethal change in temperament is never explained, and that works out for the best. You are left free to project whatever rationale you’d like, making it a more personal and plausible tale. And trust me: by the end credits, you’re thinking twice about having that bird feeder on your back patio.

Over the years, much has been made of the movie’s lack of a music soundtrack, substituting instead an eerie cacophony of bird squawks and cries. As the tension builds over its 2-hour runtime, the viewer can almost feel the birds watching them, waiting for an opportunity to attack. And when they do, the overwhelming sound makes you want to cover your head and run for shelter.

Actually, that palpable urge creates a tremendous sense of claustrophobia. It becomes quickly obvious that the only safe place from the flying onslaught is to be barricaded inside, or caged, an ironic twist on the normal relationship between bird-&-man which is repeated throughout the film.

Personally, my sense of isolation was likely more severe than intended, since I also found each of the characters completely unsympathetic, a true rarity for me with a Hitchcock film. I was scared in their stead, but I wasn’t scared FOR them. 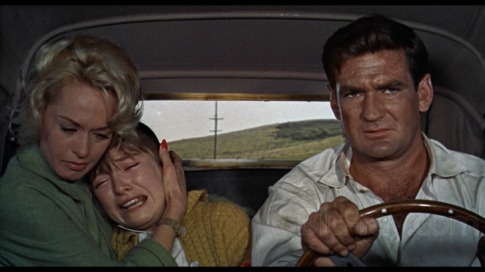 Melanie (Tippi Hedren) is certainly attractive, but comes off as unappealing and rather high-maintenance. I honestly can’t fathom why Mitch is interested in her. As for Mitch (Rod Taylor), he’s at once a mama’s boy and kinda smug: not an attractive combination. I don’t have anything against Annie (Suzanne Pleshette), but that may be more a product of latent good vibes from her role in the old “The Bob Newhart Show” as much as her character here.

Mitch’s mother, Lydia (Jessica Tandy), doesn’t want to let Mitch “spread his wings” &/or “leave the nest”, so to speak (…sorry, I couldn’t help it). We eventually learn that Lydia sabotaged Mitch’s pre-movie-timeline relationship with Annie. Thanks a bunch, Mom. And even the kid, Cathy (Veronica Cartwright), is more pathetic than pitiable. Frankly, I found her annoying.

Case in point: normally in a thriller/horror/suspense movie, I’m yelling, “Stay inside!!”, or “Run!”, or “Don’t go in there!!” at the screen, out of concern for the characters’ well-being. Yet as much as I enjoy and appreciate this film, whenever I watch it my attitude is more like “Yeah, go ahead: walk right on into the room where the birds almost undoubtedly are hiding. Go on! What’s the worst that could happen?…”.

But no matter: regardless of my antipathy towards the actors, or maybe partially as a result, their beaked adversaries are flat-out terrifying. My choice for scariest scene is fairly early on, when hundreds upon hundreds of birds menacingly encircle a school building. What on a normal day would be an odd curiosity becomes a symbol of absolute doom. 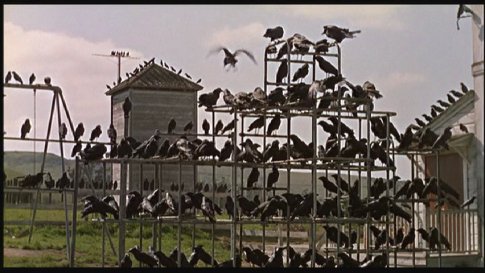 There are other great scenes, of course: outside of a diner, when a bird attack causes a gasoline explosion, and Melanie is trapped inside of a glass phone-booth. Another attack occurs indoors, when birds gain entry via a chimney. And near the end, when the house is inundated with wave after wave of birds trying frantically to get inside, literally all night.

As well as these hold up today, they must have been mind-blowing when seen over 50 years ago.

The Birds ends without a resolution, as the survivors trade one makeshift cage (the boarded-up house) for another (a car) and warily head for what they hope to be salvation. But even as they slowly drive away through a sea of birds, you’re certain that there’s nowhere on Earth they can go to ever be truly safe again.

The birds are going to win, apparently, which is what ultimately makes The Birds an unsettling and timeless classic.

**Our sincere thanks to Kristina at Speakeasy, Ruth at Silver Screenings, and Karen at Shadows & Satin for creating and organizing this 2nd Annual “Great Villain Blogathon”!!

Please check out the cornucopia of other villainous blog entrees by clicking on the image below: 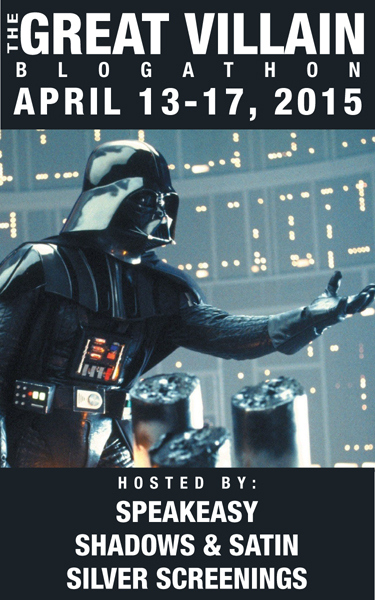