The Hobbit 2: A Desolation of Tolkien

I couldn’t put it off forever, I suppose.

Regardless of how thoroughly I enjoyed Tolkien’s books (or maybe BECAUSE of it), I’ve dreaded the thought of viewing the second Hobbit movie…,

…especially considering my well-documented feelings on the first installment.

Since a good friend offered to screen it for several of us in 3-D in his home theater, this seemed the least painful way to experience what would undoubtedly be another travesty of page-to-film corruption.

**From this point on, THERE WILL BE SPOILERS. Thus, “read at your own risk”… even though I was likely one of the last persons on the planet who had NOT already seen this movie.**

Largely, I was right. However, purely as a film, The Hobbit: Desolation of Smaug has some fun moments. Unfortunately, the film overall suffers from the same problems which plagued its predecessor. Primarily, these are:

Before I go on, let me pause here and state for the record: I’m not in favor of treating J.R.R. Tolkien’s works as if they themselves were holy writ. Even in Bible-based works of art, there is a place for extra-biblical material…IF it adds interest and doesn’t contradict Scripture. Certainly in translating Tolkien’s story from one medium to a vastly different one, we must assume that changes and additions will be necessary. I’m no purist in that sense.

But my issues with Desolation go far beyond mere changes in medium.

Case in point #1: director Peter Jackson finds a rather clever way of getting us back into the world of Middle Earth and the events of The Hobbit.  He shows us Thorin, Dwarf King-without-a-kingdom, having a purported meeting with Gandalf some twelve months prior to the start of this film. Gandalf’s message: “You need a burglar.”

Except that before that, we are treated to basically the same footage of the scruffy inhabitants of Bree and the exterior of the Prancing Pony from The Fellowship of the Ring. And while Gandalf and Thorin are talking at a table, there is (for NO apparent reason) a mysterious figure in the corner smoking a pipe so that we can only see his eyes.

Of course it isn’t Aragorn…but why reference the earlier film this way at all? The moment had the feeling of pastiche, rather than prequel. There was no reason for foreshadowing there, and the allusion to events which in fact happen 50+ years later was just odd. [According to my friend, the ugly pipe-smoking dude is a bounty hunter after the price on Thorin’s head. Ummmmm…okay.]

Point #2: We also got an extra-canonical scene of Gandalf at Dol Guldur.

He does some seriously impressive wizard-type stuff there–much more impressive than banging his staff on the bridge at Kazad-dum…which made me wonder: why didn’t he do that in Moria when the Fellowship was in danger? Couldn’t he have just blasted that cave troll? (Seriously, is Gandalf just getting old in LOTR? He can’t remember how to open a door, he gets lost in the caves…Jackson makes this majestic character the butt of too many jokes, especially in the Fellowship. It seems as if he’s trying to make up for that in The Hobbit. But the contrast mostly feels odd.)

A third example: You’ll recall that instead of one orcs-riding-wargs attack (in LOTR), we got two in the first Hobbit film. Well, we get even more wargs in this episode, boys-n-girls!! Yay, us! Plus, rather than merely one humongous spider named Shelob (see The Return of the King), we get a whole family of only-slightly-smaller spiders with no names…but the gross-out factor is rather high, and in effect the horror of Shelob’s lair is pretty effectively diminished to a yawn by comparison.

But to be fair, the spiders ARE definitely in the book. (And in the book, they talk.)

Final example of being overly self-referential: one dwarf is wounded with a morgul arrow, and a long search for kingsfoil ensues. You can guess the drill by now: “D’ya know the Athelas plant?” “Aye, it’s a weed…” 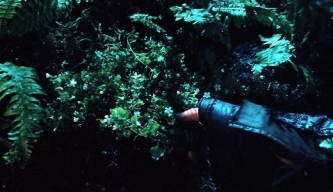 No matter how many times you cram it into subsequent movies, Mr. Jackson, I will never forgive you for omitting kingsfoil where it really counted, in the Halls of Healing in The Return of the King. (You didn’t even put it in the extended edition. Grrrrrr…)

All right, not every change was necessarily bad.

I just re-read the scene in which Bilbo helps the dwarves escape from the elves by floating down the river in barrels–but he neglects to get a barrel for himself. The film includes this moment, and it’s one of the best comic bits that I can recall. The book, of course, belongs to Bilbo; it’s his story, and all the emphasis of the action is squarely on him.

So the fact that he is the only visible actor in that chapter (and that we have to wait to see whether the dwarves made it down the river alive) makes good literary sense.

However, I understand that on film, there’s nothing too interesting about seeing closed barrels washing downstream. [Although I do think the comic effect of hearing Ooofs and Arrghs as they bounce off each other, along with other miscellaneous complaints, could have been good fun.] Having the dwarves leap into open barrels and float away bobbing upright on the current–instead of Tolkien’s more logical description of the barrels rolling around on their sides–is visually engaging.

And yet – was it necessary to include (once again) an entirely ‘extra-Hobbitical’ orc attack? Obviously Weta Workshop never gets tired of creating new and ever-more-grotesque orc faces, showing a nearly divine delight in diversity within uniformity.

I get that: it’s what they do.

But the very profusion of orc attacks is what makes them, each, LESS riveting. The more screaming, slashing, stabbing, jumping on top of, and piercing with arrows which is paraded in front of my eyes, the more diminished their impact on me and/or the story.

Alas, Peter Jackson has not been known as a disciple of the “less is more” school of storytelling, as we’ve noted in the past. (See the dinosaur stampede in King Kong for one  egregious example of that fact.) Wouldn’t it have been great, just once, to imply that an orc attack was coming, and have it NOT happen?

The first Jaws film pulled off that kind of suspense incredibly well, although I seem to recall it was at least partially born of necessity, owing to chronic problems with the mechanical shark itself. That, and back then Spielberg hadn’t yet become as self-indulgent as Jackson. (Student directors, I beseech you: learn from this!)

There are some interesting details that one could easily miss in simply reading the book: Legolas is the son of the Wood Elf King, Thauriel, and so we (appropriately) get to see our favorite elf in this movie. Also, the dwarf Gloin is Gimli’s father, and mentions his son…that’s a nice little wink to fans of LOTR.

However, Jackson also inserts an extraneous character, a warrior elf maiden, to be Legolas’ star-crossed love. Interesting? Somewhat. But it does nothing for the story as written. This is the justification for that spurious orc attack on the river, I suppose: it allows Legolas and his lady-love to leap to the rescue and take on a whole orc cohort, even as they negotiate their way downstream.

It’s exciting! And adventurous!! And…completely unnecessary to the plot of an already overlong movie.

About the dragon I have no complaint. Smaug is visually stunning and perfectly rendered. If I have any quibble it is with the “sound”. Benedict Cumberbatch is a marvelous actor, and was no doubt a tremendous choice to voice the dragon. But I can’t help thinking he would have been more effective if the sound designer had not so distorted him that Smaug sounds exactly like the voice of Sauron in LOTR. What was the point of that?

And about the dragon vs. dwarf scenes: It has been, according to one Middle-Earth historian , over 200 years since Thorin and his kin were forced out of their mountain kingdom. A gigantic dragon has taken up residence in the meantime, and he’s not overnice about housekeeping. Plus, the natural decay of years would presumably also be in play. (Think of the mines of Moria…that attack could have been no more than 50 years in the past, but it might as well have been hundreds, by the look of things…cobwebs and decay everywhere.)

But inside the Lonely Mountain, the furnaces still work, an enormous mold is ready to use, and the dwarves–while being actively pursued by a firebreathing wurm–are able to speedily construct a statue of molten gold. ***sigh*** My belief, which was suspended by a tenuous thread anyway, completely snapped at this point, and there was much eye-rolling from thence to the end of the movie. Also groaning, especially each time the dwarves “protected” themselves from scorching dragon fire by hiding behind convenient (and narrow) stone pillars. The fire goes around both sides of the pillars, and not a dwarf hair is singed.

[As an aside: the dwarves had a gigantic mold ready to make a golden statue of their king? Doesn’t this sound rather like Nebuchadnezzar in the Old Testament book of Daniel? Shoot, no wonder the dwarves were driven out of their kingdom: they were idolaters, apparently.

Hmmm…Tolkien may have “missed” that particular nuance.]

On a completely different topic, I’m glad that Jackson gave Bard, a citizen of Laketown, some backstory. If the movie is going to be this long anyway, we might as well appreciate one of the true heroes of the tale. I look forward to seeing more of him in the last film. (Wait a sec: Did I actually admit to looking forward to seeing Hobbit 3?! Maybe…but only if my friend is willing to invite me back to his house to watch it.)

I continue to truly wish The Hobbit had been made first, before any of the LOTR films, and that Jackson had been constrained by a small budget to be creative and concise at the same time.

But I fear that such a pipe dream, at this point, is like wishing for our politicians to be at once honest and efficient. No, that’s not a good analogy…

Peter Jackson was at least creative.

This entry was posted in Christian, film, movies and tagged Desolation of Smaug, Peter Jackson, review. Bookmark the permalink.

8 responses to “The Hobbit 2: A Desolation of Tolkien”