The best hockey commercials EVER, …and how we MIGHT be seeing more of ’em, sooner than we think

The commercials are at the bottom of this post. But if you’ll allow me just a moment, I’ll explain what got me thinking about ’em in the first place.

As a lifelong fan of all things hockey, I’m well aware that it’s the black sheep of the United States professional sports “family”, viewership-wise. To illustrate, the NBA’s playoffs ratings are destroying the NHL’s right now; it’s not even close. Even the NFL draft (the freakin’ draft?!?!?) crushed the Boston/Montreal Game 6 Semifinal in the ratings by a 5-to-1 margin.

And this has been the trend, unfortunately. Heck, the first two games of the 2012 Stanley Cup Finals (both nationally broadcast on NBC, by the way) got soundly thrashed by RERUNS of the following programs: ‘Dogs In The City’, ‘America’s Funniest Home Videos’, ‘Secret Millionaire’, ‘America’s Got Talent’, ‘Grimm’, ‘2 Broke Girls’, …and a rerun of the rerun of ‘America’s Got Talent’.

That’s the difference between getting beat …and getting a beat-down.

And yet, both the league and the sport are positioned for success, perhaps now more than ever before.

First of all, the NHL just received the 2014 Sports Business Award for League of the Year and inked a massive new media rights pact up in Canada. Both accomplishments signal stability and future financial strength. But more importantly, the technological landscape is changing at lightning speed, and the NHL could greatly benefit from those changes.

Television’s revenue comes primarily from commercials, but “cord cutters” (people who cancel their cable subscriptions) are increasingly damaging that revenue. This current decline of broadcast television, plus the rise of DVDs, DVRs, Roku, Hulu, and mobile viewing on smartphones and tablets, is resulting in fewer and fewer folks ever even seeing a broadcast commercial. When you can stream ‘Iron Man 3‘ or ‘Game of Thrones‘ anytime you want, or skip commercials on your DVR, you aren’t gonna know (or care) about what time it supposedly “comes on TV”. 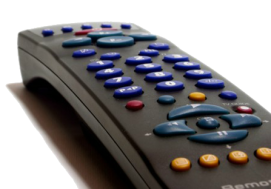 But not sports; sports is different. Who’s gonna sit through yesterday’s game after you’ve already seen the score or YouTubed the highlights? Nope, with sports we still wanna watch it as it’s happening.

Which could spell O-P-P-O-R-T-U-N-I-T-Y for the NHL. If television viewers continue to abandon broadcast TV in lieu of more convenient options, that leaves ‘live’ televised sports (including hockey) as the most attractive remaining options to broadcast advertisers. Conceivably, commercials during sporting events could end up being the only ones largely not being DVR’d over or bypassed altogether online. In many respects, it’s already happening.

This could (repeat: could) end up being the “break” the NHL has been trying for my entire lifetime.

So enjoy the commercials, gang, and here’s hopin’ we see lots more of them. Soon:

8 responses to “The best hockey commercials EVER, …and how we MIGHT be seeing more of ’em, sooner than we think”