***UPDATE – September 5th, 2014:  Since the Fast Food Workers of the nation are once again agitating for an artificially higher wage than what the market dictates, it seems that they need yet another reminder of exactly how essential their “profession” truly is… ***

(via the Chicago Tribune) – “…A few hundred fast food workers in Chicago on Wednesday voted to join a national one-day strike against their employers on May 15.  Strikes are planned for 150 cities, including New York City.  —  The workers say they want $15 per hour wages and to form a union that would bargain over benefits and wages on their behalf. Fast food workers in Chicago make about $8.25 per hour, the state’s minimum wage…”

Now, many of us have spent some amount of time employed in a Wendy’s, McDonald’s or a Burger King, commonly back when we were in our teens: the hours are flexible, and the level of mental effort required is minimal (at best). Entry level employment in this industry is usually considered to be a stepping stone on to greater things, whether that means a management position within the fast food chain, or a different job altogether.

So with all that in mind, any Fast Food folks who think striking is their Key To Success…may wish to rethink that strategy.

From SingularityHub.com, and courtesy of Instapundit:

“…(The) Alpha machine from Momentum Machines cooks up a tasty burger with all the fixins. And it does it with such quality and efficiency it’ll produce “gourmet quality burgers at fast food prices.”

With a conveyor belt-type system the burgers are freshly ground, shaped and grilled to the customer’s liking. And only when the burger’s finished cooking does Alpha slice the tomatoes and pickles and place them on the burger as fresh as can be. Finally, the machine wraps the burger up for serving. 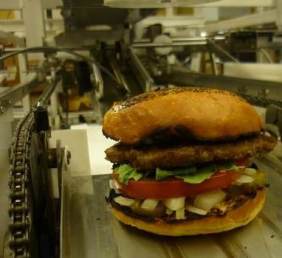 And while you fret over how many people you invited to the barbecue, Alpha churns out a painless 360 hamburgers per hour…”

This would appear to change the landscape of the entire industry. Those fancy self-serve touch screens (popularized in places like Sheetz and Wawa, and currently being test marketed by McDonald’s overseas) have been available for years, but now there’s even a mechanized system which can make the food flawlessly and efficiently. Plus, the machines will never go on strike, and don’t need health care.

Seriously, at this point, who would YOU rather deal with: a bored 17-year-old kid, or this machine?

Having the current fast food workers arguing for more money and benefits strikes me as eerily similar to France’s creation of the Maginot Line prior to WWII: they appear to be fighting the previous war.

As you’ll recall, that didn’t end too well for the French.

Word to the wise: when current technology has already made your job obsolete, your digging in for battle on the issue may just be the impetus your employer needs to make a “change”…

And if you thought $8.25/hour wasn’t enough, just wait until ‘Uniblab’ is doing your job …for free.

9 responses to “Attention Fast Food workers: you are ALREADY obsolete”