Today I want to share with you an opportunity in which the whole pro-life community can easily get involved, and which could have a tremendous impact on our cultural mindset. But it is already facing opposition, so your participation will be both helpful and encouraging to three documentary filmmakers.

Ann McElhinny, Phelim McAleer and Magdalena Segieda (of Ann & Phelim Media) want to make a television documentary on the trial of Philadelphia serial killer Dr. Kermit Gosnell, the abortionist who was convicted last year of murdering three viable babies born alive after abortion procedures, as well as the involuntary manslaughter of a client who died while under his care. The evidence suggested that he had in fact murdered many, many more viable babies. Gosnell is currently serving life in prison without the possibility of parole. Of course the media largely ignored the trial at the time. Ann and Phelim Media want to make sure that the public learns the truth.

This is the same team of journalist/documentarians who made Not Evil Just Wrong, Mine Your Own Business, and–most recently–FrackNation.  Ann & Phelim (an Irish husband and wife team) had conducted a succesful Kickstarter campaign to fund FrackNation, and decided to go the same route to raise 2.1 million dollars for Gosnell.

Kickstarter took exception to their description of Gosnell’s crimes, and said that the campaign would be removed unless they took out the phrase about “stabbing babies”…  According to the National Review:

Kickstarter had previously helped producers Ann McElhinney and Phelim McAleer raise over $200,000 for their documentary FrackNation. But the filmmakers say the crowdfunding company slow-walked their project once it learned about the topic. McAleer and McElhinney say Kickstarter did not respond to multiple e-mails for several days and finally responded with a request that the project video be amended before it could go live.

“We ask that the phrase ‘1000s of babies stabbed to death’ and similar language be modified or removed from the project,” a Kickstarter representative identified as George said in a March 27 e-mail to Ann and Phelim Media. “We understand your convictions and the horror of this person’s crimes, however we are a broad website used by millions of people. Our Community Guidelines outline that we encourage and enforce a culture of respect and consideration, and we ask that that language specifically be modified for those reasons.“

Never mind that THAT IS WHAT GOSNELL DID. OVER AND OVER AGAIN. Never mind that there are plenty of sexually-oriented films on Kickstarter at the moment (which I could tell from only a cursory look through the top-rated titles).

I also found, with virtually no effort, an adult comic book project which raised over $8,000. Its Kickstarter site states:

A sample of panels follow which contain plenty of highly offensive language. Right. On. The. Kickstarter. Page.

Hmmmm.  Yeah, those Community Guidelines…about as rigid as the Pirate Code, I see. Unless you want to make a film which might criticize abortion, or a real-life abortionist. Couldn’t have that now, could we?

Well, if YOU would like to see a documentary made on this subject, take heart! Ann and Phelim have started their crowdfunding campaign over again, on Indiegogo. And they’ve raised nearly $400,000 in a little over a week!  You can pledge as little as $1 at their secure website. It’s fast and easy, really, with any size donation being much appreciated.

And a modest $25 pledge will even get you a copy of the finished DVD (…of course, you can always donate more…). 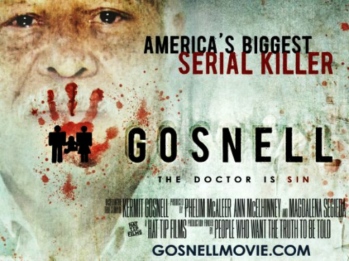 Often we may feel as if nothing we do makes any difference. But there are times when making a big difference is just a matter of finding a few hundred friends who can each do a little something.

Why not do a little something today?

8 responses to “Make a Difference: fund the #Gosnell movie”