Harry “The Weasel” Reid is shocked, shocked!, to learn of Gov’t Surveillance

Gosh-a-mighty: Harry The Weasel is suddenly all miffed about the Federal Government’s penchant for snooping.

Huh; I wonder why?

(via ABC News) – “…In letters to the heads of the CIA and Justice Department, Senate Majority Leader Harry Reid said the CIA’s decision to search the Senate intelligence committee’s network and computers without approval was “absolutely indefensible” and carried serious implications for the separation of powers between the executive and legislative branches.

Reid said he had instructed his Senate’s chief cop to examine how Senate staffers obtained an internal CIA review, which the agency accused them of improperly copying, although Reid described the CIA’s alleged monitoring of Senate computers as more serious…”

That’s odd: I don’t recall Harry expressing any similar misgivings about the Feds spying on us. But spying on HIM? Well then, that’s a different matter altogether, obviously.

Can’t have the D.C. ‘nobility’ being subjected to the same rules and indignities as the common riffraff, now can we?

Thanks for clarifying that for us, Senator Weasel. 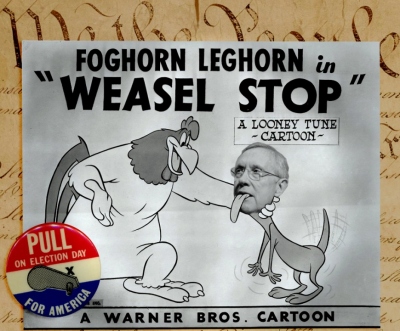 10 responses to “Harry “The Weasel” Reid is shocked, shocked!, to learn of Gov’t Surveillance”