“Competence”: City Gov’t installs Dozens of Street Signs, …ALL with the Wrong Info 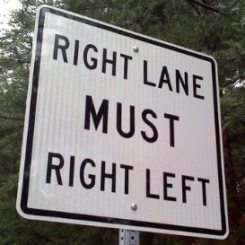 Government incompetence is almost ubiquitous these days, and it isn’t limited to the Feds by any stretch. Our local municipalities are more than capable of bollixing things just as thoroughly as the big boys on Capitol Hill.

(via Yahoo! News) – WFXT Fox 25 received a viewer tip that uncovered dozens of erroneous new signs that were placed around Boston, Massachusetts last summer. Mike Beaudet from WFXT’s Fox Undercover looked into the tip and found how wide-spread the problem was.

But even more surprising, there was a sign for Route 28 East, a road that doesn’t exist. Route 28 travels only north and south.

Hey, directions are hard! And in their defense, it’s not as if there’s any online computer maps around, or some sort of satellite-based “Global Positioning System” which they could have easily consulted…

Of course, not being able to properly differentiate between “Left” and “Right” also might help explain much of Boston’s politics. Just a thought.

This entry was posted in government, politics and tagged Boston, Dept of Highways, government, Massachusetts, politics. Bookmark the permalink.

6 responses to ““Competence”: City Gov’t installs Dozens of Street Signs, …ALL with the Wrong Info”