No, #Obamacare will NOT lower insurance premiums by “$2,500 per family per year…”

“…and if your employer does offer health care, we’re gonna work with your employer to lower premiums by up to $2,500 per family per year…”

This was NOT some minor aspect of the whole health care debate. It was a central, mantra-like selling point specifically designed to placate the country into believing the Affordable Care Act would be a huge cost benefit to one-and-all:

Of course, by now we’ve all seen the various headlines for quite some time, such as this one from the ‘USA Today’ in December of 2013:

“Employees will pay more for health care in 2014″

But even reports like THAT were widely ignored. Let’s face it: we’re prone to believe that bad news’ll happen to someone else, yet somehow avoid us. No, it’s only at individual families’ kitchen tables and in countless small business’ Benefits Offices where everyone is finally figuring out just how big a lie the President’s “…$2,500 lower per family…” claim always was.

The recent news story we covered from Pittsburgh highlighted one all-too typical example, when workers discovered that virtually ALL of them would pay more in health care premiums. Even the one employee who found he’d save money now had a towering annual deductible, making the coverage itself far less useful to him. 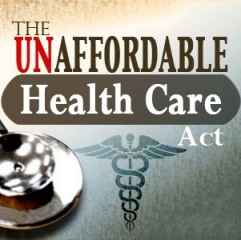 But lest you be fooled into thinking that was just an isolated incident, I decided to look for more…, and I didn’t need to search very hard.

Deciding to concentrate on just one state, I chose Tennessee, which was alleged to have one of the lowest average Obamacare premiums in the country. As you might guess, what I found was …somewhat less than comforting.

Make no mistake: THIS is Obamacare, kids…