If this is somehow a priority, then all of our country’s REAL problems must’ve already been fixed:

In a letter sent yesterday to the House Office Building Commission and the Senate Committee on Rules, Sens. Dick Durbin, Richard Blumenthal, Sherrod Brown, Ed Markey, Tom Harkin and Barbara Boxer, along with retiring Rep. Henry Waxman, said that e-cigarettes should be treated the same way as cigarettes. The latter are currently banned at the Capitol, nearby office buildings, and within 25 feet of the entrance of those buildings.

In the letter, the Democratic lawmakers say it’s unclear whether e-cigarettes are safer than traditional cigarettes, and that banning them would be “an appropriate precautionary step to promote public health and maintain a safe environment for staff and visitors of the institution and its grounds.”

For the record, I don’t smoke cigarettes; never have. Nor have I ever smoked e-cigarettes, as they are used primarily as a way to either decrease or quit smoking. Thus, I don’t have a horse in this fight.

Which is why I need to ask my Lefty friends: Why?? Why are you FORCING me to actually care here? Because from my vantage point, you’re behaving as if we’re back in the Salem Witch Trials, and these e-cigarettes are tiny, evil, vapor-emitting wands.

Although if that were the case, I’m confident that you wouldn’t actually burn any e-cig users at the stake, due to the potential carbon emissions.

This is crazy, especially in light of recent news about ACTUAL smoking, but of marijuana. To the disinterested bystander, the dichotomy ‘tween the current discussions of e-cigarettes and pot is striking, to say the least. In an age when weed is being legalized in some states, is increasingly being touted as safe, and even President Choom Gang seems to be in favor of it, why are you guys now gunning for …water vapor?

What, are e-cigs some sort  of “gateway” drug, but pot isn’t? Honestly, I’m confused here.

Oh, one more quote from the article:

C’mon, kids, do you expect me to join you in your ‘outrageous outrage’ over celebrities NOT actually smoking, while at the same time asking me to turn a blind eye to every other example of this same group’s ridiculous, over-the-top, Caligula-ish lifestyle? Really?

Tell me that you’re just funnin’ me here. Please. 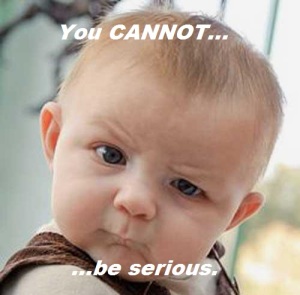 Get a grip, guys. Tell you what: the next time you break out in hives over something, anything, which actually affects my life (IRS targeting, NSA phone-tapping, baby aborting, Congress by-passing, concealed carrying, or Freedom-of-Worship nullifying), I swear I’ll take you seriously about e-cigarettes.

But in the meantime, howsabout you take a gander at some other, slightly more “pressing” matters? I have a suggestion, just in case you’re not sure where to start.