Threats, Intimidation and Payback in the ‘Goodfellas’ Administration 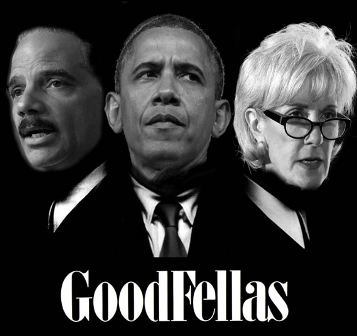 “…For as long as I can remember I always wanted to be a gangster. To me that was better than being president of the United States. To be a gangster was to own the world…”
-Ray Liotta in ‘Goodfellas‘, 1990

There’s been a disturbing, …no, make that terrifying, …trend in our politics of late. We are being governed by people who behave like gangsters, minus the stereotypical accents or any perceivable ethical code. They believe (and behave as if) our nation’s laws are only for “little people”; schlubs. They believe themselves to be above the law, beyond it.

Most of all, they believe this allows them to deal with their enemies in classic gangster style: through threats, intimidation and ‘payback’. They want to send a message, they delight in it, precisely because they believe that no one can touch them.

And God help us all: they may be right.

What else can you conclude, when faced with the recent sworn testimony about the U.S. Treasury Secretary threatening an independent ratings agency? Or the obvious implications of the IRS’ jihad against Conservative groups? Or the strong-arm tactics of the HHS Secretary?

And today, we have a brand new occurrence:

(via HotAir) – This strange announcement came last night from the US Attorney’s office in the Southern District of New York. Author and conservative commentator Dinesh D’Souza, who produced the documentary 2016: Obama’s America that went after Barack Obama in the middle of the last election cycle, has been indicted for allegedly pushing $20,000 in straw-man contributions into a Senate race in New York that was hopeless from the start…

If D’Souza violated the law, then he’ll have to be held accountable … but it will be interesting to see in court how the feds “routinely” decided to look into his activities after producing 2016.

This is not to say that Conservative folks never run afoul of the law, but rather that they are the only ones held to account. If we were watching a football game and only one team was ever penalized, you wouldn’t necessarily be upset that your guy was guilty of Pass Interference. No, the injustice would be the other team which was interfering just as much (or more; much much more), yet was rarely if EVER called for it.

If you saw a game like that, it would become readily apparent that the “fix” was in. And at that point it’s no longer a game, since the outcome is no longer in doubt.

Let’s face it: isn’t it curious that only critics of this Administration are routinely investigated, targeted, or singled out for “a closer look”? Maetenloch over at Ace Of Spades agrees with me (or I agree with him; whatever…), and listed several other such “coincidences”:

In particular, the IRS’ recent interest in Hollywood’s conservative ‘Friends Of Abe‘ typifies this trend:

Yes, there are conservatives in Hollywood. The recent scrutiny stems from their (completely understandable) desire to keep their membership private, while still being allowed to take advantage of existing tax law.

The group wants 501(c)(3) status so that contributor donations can be tax-deductible, and that does entail some scrutiny from the IRS.

…this is hardly a new and novel effort. Norman Lear operated People for the American Way as a 501(c)(3) for many years (although now is apparently a 501(c)(4) which donates to candidates), and that spent millions each year on “issue advocacy” in Washington DC and the states in its prior status– and by “issue advocacy,” we mean lobbying, of course. Laurie David and Leonardo di Caprio have the Natural Resources Defense Council.

The entertainment industry has numerous groups of this kind, plus their ability to frame their political messages into their art, with not terribly wonderful results either economically or artistically, but the IRS doesn’t seem terribly interested in these groups.

Just (another) coincidence, I’m sure.

All of this reminds me of 2001, when George Bush famously said the following:

Bush’s words were admirable, as he sought to galvanize opposition to the enemies of Freedom worldwide: namely, agents of terrorism and their enablers following 9/11.

In effect, the Obama White House is saying something similar with their actions, if not their actual words. The crucial difference rests in whom this White House views as “the enemy”.

And by all appearances, the “enemy” sure seems to be …us.

“…If we wanted something we just took it. If anyone complained twice they got hit so bad, believe me, they never complained again…”
-Ray Liotta in ‘Goodfellas‘, 1990

21 responses to “Threats, Intimidation and Payback in the ‘Goodfellas’ Administration”