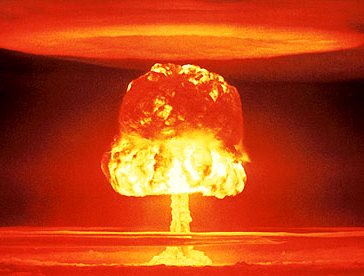 Yes, we’re back to the Nuclear Option!, and no, we’re not discussing Iran (for once).

What is it? From Legal Insurrection:

“…The “nuclear option” refers to a move by the majority party in Senate — in this case the Democrats — to change the Senate rules to allow most executive branch and judicial nominations to be approved with a simple majority – 51 votes — rather than the 60 votes now required. Under the current rules, the minority party can block a nomination with just 41 votes, commonly called a filibuster…”

Why was the previous rule so ungodly horrible that it just HAD to be eliminated by the Democrat-controlled Senate? Just listen to that purveyor of truth and light, Senator Harry Reid. From the National Journal:

With that, the Nevada Democrat set in motion a fight over changing the Senate’s filibuster rules that has been years in the making. There were roughly 67 senators on the floor for Reid’s remarks, which is very rare for the Senate.

No, Senator Reid: the American people do NOT believe any such thing.

Senator Mitch McConnell articulated the truth about this in a spectacular speech prior to the floor vote. This is a distraction (a desperate and dangerous one, too) from the Left’s abysmal failure with Obamacare. Yet they’re obviously more than willing to sacrifice any pretense of integrity in order to change the subject and appease their base.

Even in that light, the mind-numbing hypocrisy of Reid’s action here is stunning, as both he and President Obama have argued vehemently AGAINST just such a move when Republicans held the majority:

Even Joe “Foot-In-Mouth” Biden self-righteously added his two cents to this issue. Any guesses what his opinion was then? You know, back when it was being threatened by Republicans?

Seriously, is there even any question?

Back in 2005, this whole kerfuffle was averted by the infamous Gang Of 14, a mix of Democrat and Republican senators who banded together to prevent this rule being changed, and guaranteed an up-or-down vote on all judicial nominees except in “extraordinary circumstances”.

Which raised a rather obvious question today:

where are the Democrats joining with Republicans in a Gang of 14 to preserve the filibuster?

What’s done is done, I suppose. But this is going to have far more repercussions than just judicial nominees. Regardless of how craftily Reid authored this new rule, the damage has been done.

After this particular genie is out of the bottle, good-flippin’-luck cramming it back in:

Once taboo against nuke option is removed, it can be pulled again to change rules on SCOTUS or legislation,so saying it’s limited is a joke.

And in the spirit of “What’s sauce for the goose is sauce for the gander“, I leave you with this thought as to what exactly this might mean for the not-so-distant future:

So, repealing whatever’s left of Obamacare in January 2017 will take 218 GOP House members, 51 GOP senators, and a GOP president.

Or, to put it even more plainly: