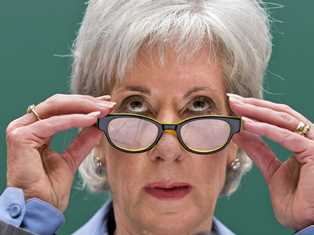 Queen Sebelius has made yet another decree, this time stating that the Pit of Despair (otherwise known as the Healthcare.gov website) is 100% safe.

Take THAT, all you Obamacare h8ers:

(via Yahoo News) – On Capitol Hill on Tuesday, a panel of computer security experts raised another fear — that the website is vulnerable to hacking. They said they wouldn’t trust their own personal information to the site, although they acknowledged they don’t have firsthand knowledge of the system and its architecture.

David Kennedy, head of the Ohio-based TrustedSec, a company that offers to hack into private systems to determine vulnerabilities, told the House Science Committee that a cursory look at the website revealed multiple “exposures” that put it at “critical risk.”

Asked about those concerns, Sebelius said: “I feel like it’s safe. Absolutely,” adding, “when there have been issues identified or flagged, it’s immediately fixed.“

Hey, Kathy: I feel like I’m still in my twenties. But you know something? I’m not. Not by a long shot.

You know, I might take someone’s “feeling” about what to order at Steak & Shake, or if it’s cold enough to wear gloves that day. But I kinda need a bit more to go on when we’re talking about my entire health history and credit card info being placed for all eternity into a Federal Government website.

And yet, with this answer, Der Commissar is asking we should go with her “gut”, as if she was picking the Rams and a 3rd-string quarterback over Manning and the Broncos.

I wonder: did she have a similar “feeling”, an intuitive “hunch”, about the website itself being ready to go live TWO MONTHS AGO?

Sure, let’s put our trust in Sebelius’ “feelings”. SHE trusts the website, after all, just like you might “trust” your drug-addicted bum of a neighbor when he hits you up for money “one last time. Swearsies“.

C’mon, what are the odds that he’d lie to you again, just to score another bag of dope?