I’m not actually a “customer”, if you mandate by law that I MUST buy your “product”… 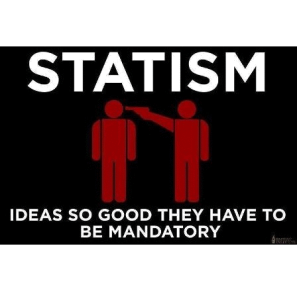 For several weeks now, the mantra that we keep hearing from Obamacare’s cheerleaders has been “give it a chance; it’s only just started“. Which is fair, to a point: it has just started, …and it’s been a frustrating, miserable disaster unlike anything which would be allowed to continue in the free market.

However, no matter how many chances we give, this can’t work for one very basic reason: government bureaucrats are in charge of it. And when those people are in charge of anything, the very last thing you can expect is excellence, at least as a private sector entity would define “excellence”.

Watch this 4 minute clip from Tuesday’s hearings and see for yourself:

Keep in mind, this sort of evasiveness is coming at the beginning of this whole undertaking. Why should we think they will somehow behave BETTER as time goes on? If/when we have an issue with coverage, or access, or cost, what makes us think that they’ll suddenly be transformed into warm-&-fuzzy do-gooders, eager to please their newly-minted customer base?

Let’s be honest here: why would they?

If we had a private sector company being this deliberately ambiguous, offering mind-numbingly inexact answers to direct questions (from an oversight committee, no less), we’d brand them as dishonest charlatans and that firm would lose market share overnight. You’d have boycotts, demonstrations, and full-page ads against them. Liberals and conservatives alike would be outraged.

As a result, the firm would likely either (A) undergo radical change to improve, (B) not change, and eventually go out of business, or (C) be bought out by a more customer-focused, more successful competitor.

But this is the Federal Government, which has granted to itself the power to enforce its “product” via IRS penalties and threats. As such, the normal rules and market repercussions don’t apply to them. Which is why we see, far from being customer-focused, them being haughtily dismissive of both oversight and their supposed “customers”.

John Hayward (aka “Doctor Zero”) wrote about this a few weeks back:

“…It’s a mistake to view this program as though it were a private-sector entity.  The commissars of ObamaCare don’t care about unhappy “customers.”  There is no competition here.  The disgruntled have nowhere to go.  You can’t even refuse to do business with Obama’s lousy insurance racket, not without paying a stiff fine – the size of which is also coming as an eye-popping shock to the Low Information Voters, who never quite understood what “individual mandate” meant until now.

The Left loves to appropriate free-market language to conceal the exercise of coercive power, but conservatives should know enough to see past that smokescreen.  It’s not going to matter that a large number of people hate ObamaCare.  Quivering lips and eyes filling with tears at the thought of a heartless betrayal by the phony they voted for will not make a difference in the long run.  Neither will anger over the horribly botched launch of the ObamaCare system.

That sort of thing is fatal to private-sector product launches, not statist takeovers of the economy…”

This will not, it CANNOT, ever be a popular success among those whom are paying for it, despite the assurances from the Affordable Care Act fanboys in the press. And it can’t be because the government leaders and bureaucratic bigwigs have no need for us to like it.

They only ever needed to make it exist. And rest assured, its continued existence is far more important to them …than yours.

6 responses to “I’m not actually a “customer”, if you mandate by law that I MUST buy your “product”…”