‘Liberal Fascism’: why the Left wants to ban, well, …pretty much EVERYTHING

Given so much of our news today, I’m more convinced than ever that Jonah Goldberg’s 2009 book, ‘Liberal Fascism‘, is essential reading in order to understand the workings of the militant Left.

For instance, take a look at this passage from page 23 (italics/bolds/underlinings are mine):

“…since we must have a working definition of fascism, here is mine: Fascism is a religion of the state.

It assumes the organic unity of the body politic and longs for a national leader attuned to the will of the people. It is totalitarian in that it views everything as political and holds that any action by the state is justified to achieve the common good. It takes responsibility for all aspects of life, including our health and well-being, and seeks to impose uniformity of thought and action, whether by force or through regulation and social pressure.

Everything, including the economy and religion, must be aligned with its objectives. Any rival identity is part of the “problem” and therefore defined as the enemy…”

Now keep that in mind as you review this news report, which eerily illustrates Jonah’s main premise:

Such ‘news’ is anything BUT new, of course. We’ve seen all sorts of insanely ridiculous suspensions of students, ranging from the 6-year-old who made a “gun” by pointing his fingers, to the 4th Grader with a 2-inch Lego “gun”, to the young girl who brought empty shotgun “blanks” to show her science teacher, …and countless more.

Yep, …THIS got a kid suspended, too.

But lest you get the notion that this is restricted to the Public School arena: it’s not. A Maryland judge wanted to ban the sale of ALL toy guns, of ANY kind, while Hawaii legislators tried to pass a similar law a couple years ago.

For insight, we can turn again to Goldberg:

“…Progressivism, liberalism, or whatever you want to call it has become an ideology of power.

Exactly so. To buttress his point, there’s another movement which is happening simultaneously, yet has nothing whatsoever to do with pretend guns: the battle to outlaw the E-Cig.

The electronic cigarette is by all appearances a tremendous invention. It gives the user a safe hit of nicotine without stinking up a room or endangering others’ health, and has been proven to be just as effective at helping people quit smoking as Nicotine patches.

And yet, anti-smoking crusaders are attempting to ban it.

Why? Because seeing people “smoke” the fake cigarette makes the poor dears uncomfortable. And in keeping with Jonah’s definition, they need “to impose uniformity of thought and action, whether by force or through regulation and social pressure“. Thus, even the totally harmless act of smoking a pretend cigarette must be eliminated from the public square, since it doesn’t reaffirm a “uniformity of …action“.

It’s all about them, you see. The Left’s personal preferences must be validated, and therefore their proscriptions are paramount. Never mind what they’re attempting to ban is both a benefit to smokers and only tangentially related to cigarettes themselves.

The hypocrisy is staggering. The same folks who defend abortions by saying “If you don’t like abortions, don’t have one” want anything that even resembles a gun to be removed from their eyesight, as if they were vampires destroying images of garlic. Similarly, those who label Global Warming detractors as “deniers of science” want to banish a proven method of smoking cessation, since it doesn’t reinforce the social stigma they’ve worked so hard to instill. 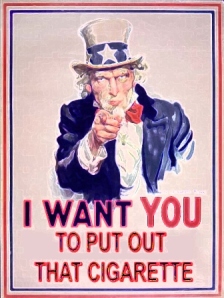 Despite it being four years old, I’d wholeheartedly recommend you pick up a copy of ‘Liberal Fascism‘ right away. Be warned: it’s a scholarly work filled to overflowing with history and facts, so take your time going through it.

But in a world now populated with toy gun and E-Cig prohibitionists, it’s a mandatory tool to decipher the Left’s otherwise incomprehensible behavior.

“…Today, liberals remember the progressives as do-gooders who cleaned up the food supply and agitated for a more generous social welfare state and better working conditions.

Fine, the progressives did that.

But so did the Nazis and the Italian Fascists. And they did it for the same reasons and in loyalty to roughly the same principles…” (page 81, ‘Liberal Fascism’)

30 responses to “‘Liberal Fascism’: why the Left wants to ban, well, …pretty much EVERYTHING”