The #Redskins are merely the latest target of the PC crowd, …but they won’t be the last.

The feelings that a sports team’s fans have about their team’s nickname/logo are incredibly strong, maybe more so today than even in years past. In the old days and in every sport, plenty of athletes would spend their entire careers with one team, whereas that’s incredibly rare now. So when we’re rooting for a team, it may consist of almost entirely new personnel from one year to the next.

THIS makes the team nickname one of the only consistent aspects with which to identify. We end up rooting for an icon and an image, whether it’s a Giant, a Viking, a Bruin, or a King.

And that’s why this brouhaha over the Washington Redskins’ nickname has folks so thoroughly steamed.

Although it’s been a minor cause célèbre for years, it picked up some major momentum back in March, when The Non-Disparagement of American Indians in Trademark Registrations Act of 2013 was co-sponsored by Del. Eleanor Holmes Norton (D-D.C.). Ever since, the Left has rallied around this as only they can, with the websites Mother Jones, Slate, The New Republic and even Sports Illustrated’s Peter King all vowing to stop using the term “Redskin” when referring to the team.

This dispute was just given more oxygen by none other than NFL Commissioner Roger Goodell. Although I believe he was attempting to placate both sides, his comment is more troubling than I think he intended it to be:

(via Breitbart.com) – In an interview on 106.7 The Fan in Washington, Goodell, who grew up in the region as a Baltimore Colts and then Redskins fan, said, “I think what we have to do though is we have to listen.”

“If one person is offended, we have to listen,” he said.

Really, Roger? Is that REALLY the standard that we want to be set?

Can you think of any free market activity, …ANY, which is occurring in this country that’s 100% popular? Where no one objects? Heck, I’m unbelievably offended by all SORTS of stuff: the over-representation of Liberal college professors in relation to the population at large, the 27,000 different names for a submarine sandwich around the country, and the cancellation of ‘Firefly‘, just to name a few.

I’m ticked off by a TON of crap, and I demand everyone listen!

But, …that’s not the way it works, is it? No, it’s only when the permanently outraged Left works themselves into a lather that the world is commanded to embrace their newest mission du jour, so as to reinforce how gosh-darned “enlightened” they are.

Despite their theatrics, the entire Redskins’ controversy is based on a false premise: namely, that the name is comparable to the N-word as a horrific pejorative. Well, it’s not.

According to Smithsonian historian Ives Goddard, early historical records indicate that “Redskin” was used as a self-identifier by Native Americans to differentiate between the two races. Goddard found that the first use of the word “redskin” came in 1769, in negotiations between the Piankashaws and Col. John Wilkins.

Throughout the 1800s, the word was frequently used by Native Americans as they negotiated with the French and later the Americans. The phrase gained widespread usage among whites when James Fenimore Cooper used it in his 1823 novel The Pioneers. In the book, Cooper has a dying Indian character lament, “There will soon be no red-skin in the country.

The Pioneers and other books by Cooper were largely seen as sympathetic toward Native Americans and their struggles in the 1800s.”

It wasn’t until later that “Redskin” was used in an insulting manner, but by that time, so was the term “Indian”. This is largely a distinction without a difference. Certainly the NCAA has already come to this conclusion, as they’ve been banning the use of American Indian nicknames for its colleges for ages. Let’s not kid ourselves: if the Politically Correct crowd succeeds in winning the Redskin debate, they’ll be coming after the sports teams in Cleveland, Kansas City and Chicago next, as surely as an extra point attempt follows a touchdown.

Furthermore, look at the fans of this team: do THEY look at the nickname as an insult? Hardly. They look at the Native American imagery as a symbol of pride, strength and distinction: the same way that the term was originally intended and used.

People are identifying WITH the image, not disparaging OF it. They’re exultant, not insulting. 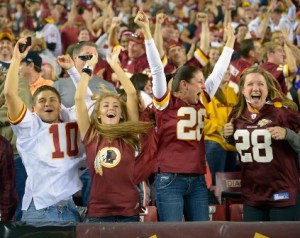 Ironically, Sports Illustrated seemed to understand this not that long ago. Back in 2002, they ran a major story called “The Indian Wars“ which discussed the topic of Indian nicknames in sports. One section in particular caught my eye:

Overall, 69% of Native American respondents—and 57% of those living on reservations—feel it’s O.K. for the Washington Redskins to continue using the name. “I like the name Redskins,” says Mark Timentwa, 50, a member of the Colville Confederated Tribes in Washington State who lives on the tribes’ reservation. “A few elders find it offensive, but my mother loves the Redskins.“

This is where I go full Libertarian: shouldn’t it be up to the teams and their fans what they are called? If it proves offensive, they’ll lose popularity, and then revenue, …and by golly they’ll change their name then, lickity-split. But if we are truly a free country (an ever more disputed notion), this shouldn’t even be an issue.

The NFL, and everyone else, needs to simmer down. No one has the right to not be offended, of which I’m reminded by the Leftists every time yet another crass, objectionable TV show is aired. “If you don’t like it, don’t watch it…” they say. Well, they should take their own advice.

Personally, I’m guessing that the Redskins organization will eventually wilt under this assault and change their name to something more appropriately acceptable and passive, like the Washington Handmaidens or the Washington Milquetoasts. Then there will be plenty of self-congratulatory harumphing all around, and life will go on.

But when someone starts complaining that your team needs to change its name because it’s insensitive to people who suffer from gigantism, or glorifies a mass murderer of bison, don’t say I didn’t warn you.

6 responses to “The #Redskins are merely the latest target of the PC crowd, …but they won’t be the last.”