When did “To disagree with” someone become “HATE”??

In light of the hullabaloo over Indiana’s RFRA law and the rise of the “Tolerance Police” at our nation’s universities, this post is (sadly) topical once again.

Not much has changed in the last coupla years, has it….?

When, exactly, did the mere act of not enthusiastically embracing an idea, thought, or ideology become synonymous with “Hate”?

Notice the utter lack of actual logical consistency here. The accusations are hurled as if inarguable facts, but they make no more sense than saying “If you don’t think Catcher In The Rye is a particularly well-written book, then you ‘hate’ literature”. 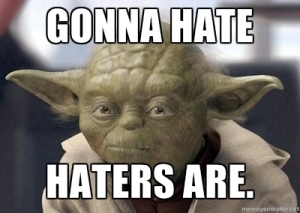 Even the most cursory Google search nets thousands of headlines like the following:

There’s even a plethora of websites dedicated to such thinking, my favorite one being http://www.RepublicansHateWomen.com/.

Keep in mind: many, many of these reports are emanating from Major Media sites like the Washington Post, MSNBC, and Salon. They aren’t little ma-&-pa blog sites, or even professional lefty morons like Bill Maher or Michael Moore. We’re not even talking about the Southern Poverty Law Center, whose entire existence is predicated on calling Conservatives and Republicans “H8Rs“.

I mentioned the other day that the Obama Administration and their flunkies were actively changing the meaning/use of words, and “hate” may be the consummate example. There’s no question that the Left’s most strident supporters have eagerly embraced this new term as secular Gospel, and certainly the constant, daily drumbeat of “disagreement=hate” will have some further effect on the nation at large.

However, much like the hyperbolized over-utilization of ‘racist‘, I believe this, too, will ultimately boomerang on the Left.

The Dinosaur press is slowly but steadily losing relevance, since their readership is evaporating even as their market values plunge. On cable TV, MSNBC’s ratings are in complete freefall, while FOX News remained #1 for the 86th straight month. And with the meteoric rise of tablets and smartphones, more folks than ever are skipping the Network News programs and opting instead for the internet to get their info.

Seriously, what under-40-year-old do you know who watches the CBS/ABC/NBC evening news every night?

So go ahead, guys: by all means, keep it up.

You’re doing such a good job of hoisting yourselves with your own petard, I’d “hate” to get in your way.

20 responses to “When did “To disagree with” someone become “HATE”??”