The Divider-In-Chief stirring the Racial Pot, once again…

We’ve already covered the Zimmerman trial recently, and weren’t planning on revisiting the issue. However, after President Obama came out for his absolutely bizarre 17-minute speech on Trayvon Martin, I can’t let his remarks go unchallenged in this space.

If you missed his address, you can watch it here. My primary criticism is the counter-productiveness of re-injecting race into a topic where race was already determined during the trial to have had no impact whatsoever.

That, and the stark implication from the President of the United States that the jury verdict was completely, 100% wrong.

For perspective, there are two sources I’d ask that you consider. The first one is from Bryan Preston over at PJMedia.com (“Why Obama’s Remarks on the Zimmerman Case Are a Failure of Leadership“), and is an incredibly cogent review of the President’s remarks on Friday.

Here’s just a sample, although the entire piece is an essential read:

Obama then rejected the verdict when he said “So — so folks understand the challenges that exist for African-American boys, but they get frustrated, I think, if they feel that there’s no context for it or — and that context is being denied. And — and that all contributes, I think, to a sense that if a white male teen was involved in the same kind of scenario, that, from top to bottom, both the outcome and the aftermath might have been different.”

So the jury got it right, …except that in another universe with different facts, they got it wrong.

The tragic shooting of Trayvon Martin is becoming a cause, or an excuse, for some to commit violence against their fellow Americans. Rioters have committed numerous acts of violence, including attacking a Hispanic man in Baltimore and assaulting a white grandmother in Houston.

This is unacceptable. Unrest has been encouraged by the New Black Panthers, by Sharpton and the refrain “No justice, no peace.”

“If I see any violence, then I will remind folks that that dishonors what happened to Trayvon Martin and his family.”

There has already been violence. Has he not seen it?

All of this is simply pandering on Obama’s part, and he dishonors the presidency itself when he speaks this way. 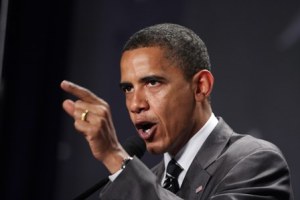 The second item that I’d suggest you review comes from Bill Whittle. While not a response to Obama’s comments, it puts the entire trial and the media’s racial pot-stirring into focus. If you followed the case, you already are aware of some of what he points out. But if you didn’t follow the trial, then the following few minutes will be a complete revelation for you.

Either way, Bill does his usual professional job of combining context and content into one seamless package.

“…What we need to do is focus on our commonalities as people, and as Americans. What’s needed is the freedom to IGNORE our racial differences, in order that we might get beyond them…”

I still believe that’s the only way our nation will be able to eventually move forward on this issue.

Unfortunately, the words of our President this past week have just made getting beyond the subject of race a substantially more difficult task.

12 responses to “The Divider-In-Chief stirring the Racial Pot, once again…”