#Egypt, the Middle East, and the ‘One-State Solution’… 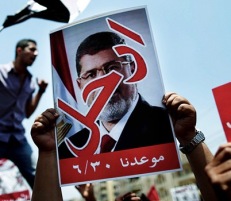 Egypt continues to be embroiled in turmoil.

Mohamed Morsi and the Muslim Brotherhood have lost their shot at power in Egypt (nice job with that, fellas!!), much to the chagrin of our President. After all, Obama was one of Morsi’s biggest supporters, with the story of the two men playing out similarly to one of those old ‘boy-meets-girl’ trade paperbacks:

Now, no one’s quite sure as to exactly WHAT form of government will ultimately replace the Morsi regime in the long term, although the general consensus seems to be: probably something even worse.

Mark Steyn recently gave his thoughts as to why mind-blowing chaos seems to the rule over there, both in Egypt and throughout the Middle East:

“…I would bet Egypt’s fate will be largely driven by its fiscal ruin.

Morsi is a good example of what happens when full-blown Islamic rule is put into effect in a country without the benefit of oil. He’s your go-to guy when it comes to ramping up the clitoridectomy rate, but he’s not so effective when it comes to jump-starting the economy.

In February, the government advised the people to eat less and cut back the food subsidy to about 400 calories a day — which even Nanny Bloomberg might balk at. Amidst all the good news of the Morsi era — the collapse of Western tourism, the ethnic cleansing of Copts, the attacks on the Israeli embassy, sexual assaults on uncovered women, death for apostasy, etc. — amidst all these Morsi-era success stories, even a Muslim Brother has to eat occasionally.

Egyptians learned the hard way that, whatever their cultural preferences, full-strength Islam comes at a price. “

And now, the Muslim Brotherhood is attempting to damage the perceived legitimacy of Egypt’s new, interim president Adli Mansour, by “accusing” him of an unforgivable crime… being Jewish.

All of this is why I am renewing my call for the implementation of Andrew Klavan’s “One State Solution”. We highlighted it last year, during the then-current problems in Gaza, and I can’t see one reason why it wouldn’t work.

Okay, …so maybe I see ONE reason.

13 responses to “#Egypt, the Middle East, and the ‘One-State Solution’…”