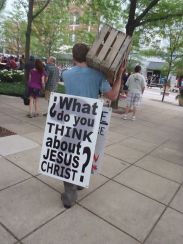 Yesterday I wrote about our experience at Buskerfest on Saturday night. We were only there an hour or so, just long enough to catch the flavor of the event which is in its fourth year. This was our first time attending, and we were mainly there to support our friend Adam, who performs original poetry under the stage name “Adosh.”

Adam has since shared with me the guidelines from the committee, which were sent to him three days prior to the event.

Here’s the salient excerpt (emphasis mine):

There really aren’t strict rules for buskers at our event but we do hope you will show courtesy to your fellow performers.  Here are a few simple guidelines:

• Your performance MUST be appropriate for all ages – no vulgarity or political propaganda.

• There is no permit or fee required as part of this event.

• Please give room to stages and other performers-buskers should spread out throughout the festival.  If you are a musician, for example, don’t perform next to another musician, find another spot where you don’t compete for sound. Give yourself room for an audience to gather.

• If you use amplification, keep it low so you don’t interfere with other performers or nearby activity and vendors.

• Stay at least 10 feet away from doorways of businesses that are open.

• Buskers under 16 should have an adult present.

• You may give out business cards or promotional flyers to those who ask, but we discourage signage or mass distribution of paper materials to reduce litter. No political or religious materials may be distributed or presented.

I have to wonder whether this set of “guidelines” (why does that word make me think of pirates?) was screened by the legal department.  It does seem to be sending some mixed messages to the performers –first of all by claiming to have no “strict rules” and then listing (some of ) the so-called guidelines in the form of “thou shalt nots.”

I find it curious that “political propaganda” is implied to be unfit for “all ages” and is lumped together with vulgarity.  Since propaganda can simply mean “the particular doctrines or principles propagated by an organization or movement,”  I believe there were other groups present (notably FoodNotBombs.net, a social activist organization) who were presenting propaganda–no pejorative meaning intended.

And then there’s that last point, which starts out sounding like a plea to avoid generating trash by leaflet-ing your audience.  We’ve all been at events where every passerby gets a flyer, and 90% end up on the ground.  Fair enough.

But that same bullet point ends up with a prohibition against displaying or presenting “political or religious materials.” Does that mean that one could neither hand out nor display copies of the Constitution? Couldn’t hold a Bible? Wear a cross?  Without defining “presenting” or “materials,” doesn’t that seem rather a cryptic line to toss in at the end…did they hope no one would notice?

Woody mumbles: (Andy’s birthday party has been moved to today)

At the time, Adam was asked–courteously, he assured me–to take off his sign because One Summit Square, where most of the event took place, was “private property.”  Now any Free Speech advocate worth his salt knows full well that that argument doesn’t hold legal water.

As far back as the mid 1940s, when the courts examined freedom-of-speech claims on so-called private property (e.g., shopping malls), the Supreme Court held that

“the more an owner, for his advantage, opens up his property for use by the public in general, the more do his rights become circumscribed by the statutory and constitutional rights of those who use it.” In striking a balance, the Court concluded that the free-speech rights of the individual were paramount over the property rights asserted by the company.

I would contend that the bank which now owns One Summit Square, in allowing a free and public event which would draw dozens or hundreds of performers and thousands of spectators to its grounds, as well to as the surrounding public sidewalks and streets, had effectively made that space public property, for the duration of the festival.

And in creating an event to which street performers were invited en masse, did the organizers purposely ignored the rich history of street orators and preachers, and even of religious musicians and actors dating back to the Middle Ages and earlier?  Several revivals in England (under John Wesley and George Whitefield, among others) would not have happened without open-air preaching.  Hyde Park Speakers’ Corner has attracted a rich diversity of political and religious speakers every Sunday since 1872.

If Buskerfest truly intended to represent a cross-section of our city at large, and offer something for everyone, but at the same time intended to prohibit religious performances–in the “City of Churches” no less…then they should at least have the honesty and guts to say so unequivocally.  They should also be able to back up their prohibition with cogent reasons which will hold up to legal scrutiny.

Otherwise, the Buskerfest committee are really no better than pirates.