In the new War On Terror, WE are the targets…

Saw an old Far Side comic the other day, and it got me to thinking about Islamic Terrorism. Here, take a look: 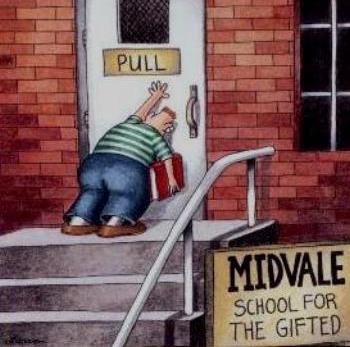 This is exactly what we’re trying to accomplish in the current version of the War On Terror: we’re pushing really, really hard on a door which is clearly marked ‘Pull’.

The world has been at war with Islamist terrorism for decades, dating back at the very LEAST to the 1972 Olympic Games in Munich. The list of attacks from Muslim Extremists (aka “Islamists“) is long and bloody, of which the recent Boston Marathon bombing is only one out of at least a couple hundred such attacks worldwide, 30+ of which happened in just the last three years alone.

But if you listen to the President, everything’s all better now. This theory doesn’t begin to hold water, as Charles Krauthammer points out:

Charles is largely correct, except on one significant point: Obama is not being contradictory. He’s winding down the war efforts in the Middle East, yet keeping the anti-terror efforts alive here because he’s not concerned with Islamist Terror.

For evidence, take a gander at this article from Investor’s Business Daily:

The White House assures that tracking our every phone call and keystroke is to stop terrorists, and yet it won’t snoop in mosques, where the terrorists are.

That’s right, the government’s sweeping surveillance of our most private communications excludes the jihad factories where homegrown terrorists are radicalized.

Since October 2011, mosques have been off-limits to FBI agents. No more surveillance or undercover string operations without high-level approval from a special oversight body at the Justice Department dubbed the Sensitive Operations Review Committee.

So, if we aren’t looking where the obvious terrorists are, who are we supposed to be worried about committing acts of terrorism? C’mon, YOU know the answer already, doncha’?

“Why don’t they just call them Tea Partiers and stop beating around the bush?”

The scenario had been carefully planned: A terrorist group prepared to hurt vast numbers of people around Boston would leave backpacks filled with explosives at Faneuil Hall, the Seaport District, and in other towns, spreading waves of panic and fear.

Detectives would have to catch the culprits.

Months of painstaking planning had gone into the exercise, dubbed “Operation Urban Shield,” meant to train dozens of detectives in the Greater Boston area to work together to thwart a terrorist threat. The hypothetical terrorist group was even given a name: Free America Citizens, a home-grown cadre of militiamen whose logo would be a metal skull wearing an Uncle Sam hat and a furious expression, according to a copy of the plans obtained by the Boston Globe.

(**Writer’s tip: you always know that when the author uses the word “cadre“, you’re not supposed to like those folks. Just sayin’…)

So we can’t go into mosques, yet for months at a time we’re preparing to fight… Tea Party-ish “militias”?

And just in case you’re thinking that this type of military training is an anomaly of some sort, …it’s not, not by a long shot. Add into the mix that we’re currently supporting the Muslim Brotherhood in Egypt, an Islamist group that is many times worse than the previous regime of Mubarak, and you begin to get a pretty stark picture who the Enemies Of The State are to this Administration.

Now does the NSA snooping, the IRS haranguing, the gun control pushing, and the DOJ phone record stealing all start to make a touch more sense?

There’s no need to worry about Islamist terrorists; they are not the enemy, according to our leaders: WE are.

As long as our own government seeks to punish, isolate, and intimidate its own citizens, who merely wish for their Government to operate within the law and spend within its means, how can we ever hope to win a battle against the guys who repeatedly TELL the Western World that they exist to see our demise? Because unless we remove those leaders from their positions of governmental power, rest assured that such wrongheaded behavior will continue apace.

It was always going to be an uphill battle to be victorious in any sort of War On Terror. But just as you can’t open a door that says “push” by pulling, we have no prayer of winning this war as long as we’re fighting the wrong opponent.

6 responses to “In the new War On Terror, WE are the targets…”