For the record, if anyone out there thinks this was a clever or winning argument for this guy to make, I’d be curious to hear your explanation.

During today’s IRS hearings, Democrat Jim McDermott scolded representatives of groups who were victims of the IRS targeting scheme in the most condescending way possible, basically telling them: “Hey, if you guys hadn’t applied for tax exemption, the IRS wouldn’t have had to target you“. 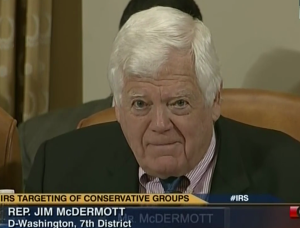 Which, to be fair, is a bit like telling a rape victim that “…if you’d just stayed home that day, or if you hadn’t insisted on walking through the park, nothing would have happened, now would it??…”

Thankfully, Paul Ryan stepped in immediately and broadsided McDermott, reminding him of one rather important fact:

“We had acting Commissioner Miller here a couple of weeks ago, and we asked him: Did groups with the word ‘Organizing‘ or ‘Progressive‘ in their name; were THEY targeted?

The answer was NO…”

This is a Public Relations disaster for the Democrats, especially as they’ve been actively trying to portray the GOP as overreaching as recently as yesterday, with their continued hyperventilating over Issa’s “Paid Liar” comment about Jay Carney.

What Democrat McDermott has been able to accomplish with his “Blame the Victim” diatribe is to:

In the words of Pepper Brooks (from one my favorite guilty pleasures, Dodge Ball):