Perfectly said: “Eric Holder has been a disastrous Attorney General for a REALLY long time…” 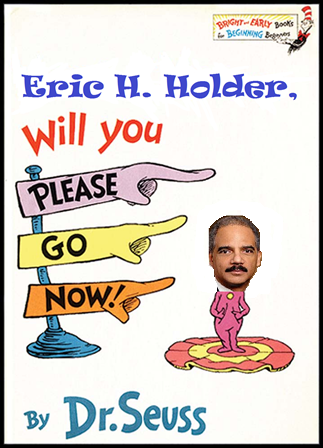 A year ago I wrote:

“Holder was the one responsible for the Marc Rich pardons, and it was his Justice Department that dropped the voter intimidation case against the New Black Panther Party back in 2009. Holder also had the bright idea of trying terrorists in criminal court, an idea which thankfully was blown up by Lindsey Graham, of all people. But that isn’t why he needs to go (at least, that’s not all of it).

No, his refusal to adequately explain his knowledge and involvement in Operation ‘Fast and Furious’ is why Holder is guilty of at LEAST contempt, and why it’s long past time for him to leave.”

I was 1000% right then, …and I’m even more right now: Eric Holder deserves to be fired and perp-walked down the steps to a waiting paddy wagon.

So for an update of Eric “If I’m Breathin’, I’m Lyin’… ” Holder’s latest transgressions, check out this vid from National Review’s Jonah Goldberg:

Seriously, the only reason this creep is still around as Obama’s combination Consigliere/hit-man is that he knows where the bodies are buried, …figuratively AND literally, I believe.

If there’s any justice on Earth, he’d be the latest tenant of Club Gitmo, which would not only be deserving but also incredibly ironic.

And for a just little bit more on this whole affair, here’s another report featuring Brit Hume, who’s just as disgusted as I am:

Looks like Holder may finally have crossed one bridge too many.

If you’re locking up journalists for soliciting classified info, then you don’t need to lock them up for disclosing it. You’re simply punishing them on the front end instead of the back end.

Is that what Holder’s planning to tell the House Judiciary Committee — that he’d never dream of interfering with a reporter’s transmission of a leak because … hopefully he’ll have already silenced that reporter for obtaining the leak to begin with?

See now why maybe O’s thinking of nudging this guy toward the exit? Good lord, when even David Axelrod’s “disturbed” by what the DOJ did, who’s left for the White House to appease by keeping Holder on?

8 responses to “Perfectly said: “Eric Holder has been a disastrous Attorney General for a REALLY long time…””