Virtue or Vice: Setting an Example for our Children to follow….

What is wrong with our culture?

From the Associated Press, via WEAU.com: 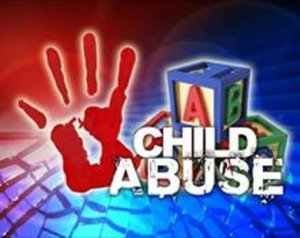 Sgt. Jessie Metoyer says one of the employees, a 22-year-old Caledonia woman, is the mother of two of the children who physically assaulted the toddler. Metoyer says the three children held down the 2-year-old and punched and kicked him. Police say the video was taken by one of the two women.

The Caledonia woman and a 23-year-old Racine woman are each charged with child abuse by failing to prevent bodily harm. Both women appeared in court Friday and remain in jail.

When I first heard this, I didn’t know what to think. Punching and kicking a 2-year-old? And the daycare worker films it, and then posts it to Facebook??

When did our society become populated by people who could condone and LAUGH about this? This is savagery, and that comparison may be insulting to actual savages.

The only reason these women were caught is because they filmed it and posted it themselves, which begs the question: how often does this happen when the perpetrators AREN’T monumentally stupid enough to, in essence, turn themselves in?

Society is engaged in a battle for our children, and right now the Good Guys are losing.

Last week, I witnessed a well-dressed yet visibly-harried woman desperately trying to juggle 8+ shopping bags and her purse at the mall, while her 3 children (age range approximately 10-15) walked next to her, each encumbered only by a smartphone, utterly oblivious to their mother’s circus act.

She didn’t say anything, they apparently couldn’t begin to notice, and I was horrified. But when I offered to help her with her bags (deliberately not looking at the kids, lest I accidentally vaporize them with a stare), she attempted to smile, frantically assured me she was “just fine, thanks…”, then struggled on.

Oh: and as she walked away, her kids gave me a look usually reserved for when you discover something unpleasant and foul-smelling on the bottom of your sneaker. Then they diligently went back to their respective phones.

Someone please explain this to me, ’cause I just don’t get it.

This family was visibly well-off, financially, but a poverty of human decency was just as apparent. Why would so many parents today put themselves in the role of indentured servant to their children? I’d happily lay down my life for my boys if necessary, but treating them like a visiting rajah doesn’t seem that healthy a concept to me.

Yet, I watch parents endure the most insane behavior from Little Jeffrey or Darling Veronica, not offering even the mildest rebuke or redirection. What gives? I’d have been reduced to a smoldering pile of slag if I’d behaved that way for half an instant (by either of my parents), and boy-oh-boy, did I know it.

…I’m comfortably sure my own boys are up to speed on this, too.

So in one corner we’ve got kids being taught and encouraged to commit mindless violence against a helpless toddler, and in the other corner are children who are learning that only their wants and needs are important. In my admittedly humble opinion, both are victims of a form of child abuse, and aren’t being prepared to enter a civil society.

If anything, they’re being weaponized, made into cancer cells to be injected directly into society’s lifeblood.

Add in our Federal Government’s insistence on setting themselves up as the official arbiter of what is appropriate for today’s youth, and maybe it’s no wonder that as a people we’re now exponentially more crass, selfish, immature, and generally lacking the moral underpinnings and expectations which drove our parents, and our parents’ parents.

As a result, perhaps that’s why we have so many able-bodied citizens willing to be on Food Stamps and every conceivable government handout, in perpetuity.

Perhaps that’s what allows monsters such as Kermit Gosnell to not only exist but flourish in our neighborhoods.

For the sake of contrast, allow me to flashback to about three weeks ago:

As my wife and I are walking towards the car, I turn around to check on the whereabouts of my boys. And there they are: my two sons (age 11 & 12) are holding the doors open for a mass exodus of people at the Interstate Rest Area, but they show no signs of tiring of their self-assigned duty. Heck, they seem to be genuinely enjoying it.

And I couldn’t be prouder of them.

When I was raised, we were taught to be respectful of our elders, women, children, animals … and basically everyone else, too. Yes, my father was a throwback, peppering my youth with reminders of why a man should walk on the outside of a sidewalk for a woman (in case a passing car splashes…), or gives up his seat to the elderly (a favorite retort of his: “What? Your legs are broken all of a sudden?”).

And yes, we were told to hold open doors for men and women alike.

The world seemed to possess a plethora of rules, and he was intent on teaching me all of them.

Once, after I did what could only be termed a barely perfunctory job of cleaning the garage, he made me silently witness him do a REAL garage cleaning, although he was still dressed in a suit from work. And I wasn’t allowed to help; I’d already had my chance. I just had to sit…and watch. Easily one of the longest hours of my life, I witnessed him transform our garage into a two-car-bay, 99.9% sterile environment capable of passing the most stringent health department inspection.

So maybe I can’t be faulted for rolling my eyes when I see kids these days who flagrantly disrespect their parents, or speak as if they’re remunerated by the cuss word. Or, maybe I’m just getting old and curmudgeonly.

Both are likely, I suppose.

Once upon a time, we ALL taught our youngsters about morality, manners, and societal expectations. We ALL expected EVERYONE’s boys and girls to learn about God, country, and family. Respect. Virtue. Humility. Honor. Work ethic. 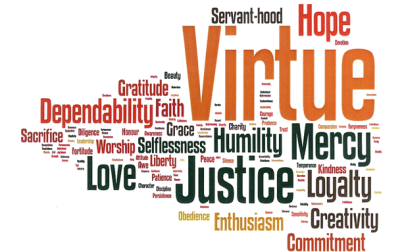 Now? Not so much.

This will not be fixed by another Government Program, no matter how well-intentioned it supposes to be. Neither will disengaging from the world change anything for the better. The first step in this, to me, is setting a proud and fearless example for the children in our sphere of influence, tirelessly teaching them right from wrong. Isn’t it our responsibility to prepare them for what the world holds, providing for them the tools to combat it, so that they’re strong enough in their minds and hearts to become happy warriors themselves?

Then and only then will they be able to set an example for their generation.

Evil in its infinite forms has always existed, and it’s always been necessary to battle it in our daily lives. But as my sister asked yesterday, are we today really prepared to “stick (our) neck out and commit to the truth, in a climate where truth is unpopular…”??

Because if we aren’t, then this battle is already lost.

24 responses to “Virtue or Vice: Setting an Example for our Children to follow….”