The many, many, many things the Obama Administration “just didn’t know”…

This is gonna take a second to illustrate my point, so please bear with me, okay?

Pretend for a moment that you’re a CEO of a major corporation. You have all sorts of assistants, VPs and lieutenants whose sole job is to keep you informed. Also, since it’s your responsibility (not to mention how you make money), you spend a great deal of time pouring over numbers, charts, spreadsheets, etc…

And most importantly, you talk with your folks.

Now, all of you who’ve had management jobs, or who really are CEOs, you know that many times a subordinate will tell you only what they think you want to hear. Which is why an effective CEO/manager figures out ways to get the truth: you know who to talk to, you know who to trust for the real skinny on what’s happening on the production room floor. This is how you stay in business, a crucial process that a former boss of mine wryly referred to as “his paycheck continuation program”.

But what if you DON’T stay informed this way?

In my experience, something big, bad, and horrible will inevitably occur. Something entirely foreseeable, yet tragic and/or expensive. In that instance, even as you set about addressing/correcting the problem, somewhere along the line, …you flip out.

“You told me things were going just fine, and now THIS happens?”

“If you needed help or simply just needed advice, …why didn’t you ASK for it!!!??”

And THIS, guys and gals, is my primary complaint with the Obama Administration. 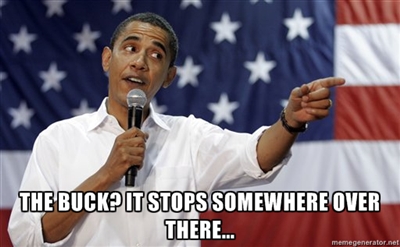 Ya’ see, their excuse (every single time) is “I didn’t know”:

If one of these events took place on someone’s watch, you could chalk it up to a communication error. Two? Okay, the government is pretty big, so sure, anything’s possible. Three? Maybe, I guess, but that’s still a reach.

But THIS? No way. And I haven’t listed all of the possible examples. I compiled this list quite literally off the top of my head: there’s waaay more.

Plus, in the majority of these examples, there was far too much at stake for a field operative/underling/lackey to assume sole responsibility for the decision. In Benghazi, for instance, we’re supposed to believe that Sec. of State Clinton was not “in the loop” regarding the deteriorating conditions of this outpost:

(CNN) – Rep. Michael McCaul, R-Texas, refers to an Aug. 16 cable that warned that the Benghazi compound couldn’t withstand a coordinated attack. He asks whether Clinton was aware of the cable.

Is this a face that would lie to you?

Once again, they “didn’t know”.

Sticking with Benghazi, let’s use the ‘reasonable person’ test here: What direct report is willing to stick his/her neck out that far, when it’s obviously a life-or-death situation, in an area populated with Islamist radicals, on the anniversary of 9/11? This wasn’t the consulate in Ottawa, or Melbourne; this was our embassy in war-torn Libya, which had already been attacked just weeks prior. What civil servant is going to jeopardize their entire career over something so risky, without sending it up the chain of command… if only to cover their own precious posterior?

The Obama Administration would have us believe that they must hire such people by the metric ton, as the Administration repeatedly hews to its Pavlovian response.

Well, I sure as heck do.

There are only two logical answers for a list like this: (A) systemic, egregious and staggering incompetence, …or (B) they’re lying. Not a great menu to choose from, I’ll grant you, and either answer would earn us the heave-ho from our hypothetical CEO gig in fairly short order.

This is a tough one: “Incompetence”? “Lying”? Both, perhaps? They’re each tempting and equally likely, but I gotta admit…

32 responses to “The many, many, many things the Obama Administration “just didn’t know”…”