Being “Discriminating” when it comes to #Immigration would be a GOOD thing….

Had a discussion with a young man the other day about why “discrimination” was not inherently a bad thing.

Now, that sentence will make some people immediately go “Whaaaat??”, but before they rush to burn me at the stake, kindly recall what “to discriminate” meant originally. Coming from the Latin discriminatus (which is the past participle of discriminare), the word literally means “to distinguish between”, and dates back to the 1620’s. Even its secondary definition is “to use good judgement”.

So, whenever we have to decide between one option or the other (soup or a sandwich? Coke or Pepsi? Ginger or Mary Ann?), we’re being “discriminating”…, as well as eminently logical.

Naturally, the Left has taken this word and slapped a new meaning onto it, making it in essence a pejorative. This has long been a favorite tactic of Liberals, who’ve also redefined or tortured words such as fair, gay, hate, judgmental, rich, racist …and even liberal itself. The result being that “discrimination” now almost solely refers to ILLEGAL discrimination, although the “illegal” part is virtually never included in its use.

And so I told the young man (whom I originally mentioned), being truly “discriminatory” has historically been and remains a good thing, and we’d undoubtedly be much better off if we were to be more discriminatory, not less.

Consider the horror of the 2013 Boston Bombing. From the Washington Free Beacon:

“…The FBI revealed last week that it was warned by a foreign government in 2011 that Tamerlan Tsarnaev, who was killed Friday, was tied to “radical Islam” but the FBI was unable to confirm the links.

Added Patrick S. Poole, another counter-terrorism specialist, about FBI policies on Islam: “I have zero doubt it affected their investigation of Tsarnaev.”

A U.S. official said FBI policies of playing down Islamic links to terrorism resulted in the FBI not identifying Tsarnaev, 26, or his brother, Dzhokar Tsarnaev, 19, who was charged with last week’s bombing, as Islamist terrorists.

It was the failure of the FBI to properly discriminate which allowed these terrorists to remain free. Why? Because to “discriminate” has become such a loaded word that even the appropriate application of it is now taboo, and now even our law enforcement is so terrified of being charged with illegal discrimination lawsuits, protests and bad PR that they refuse to acknowledge clues which are right. In front. Of their eyes.

And this applies to our immigration policy in toto. We have roughly 314 million citizens here in the United States, and by rights we should WANT to discriminate as to who is allowed to join those already here, for both our physical and economic safety.

A sovereign nation is NOT a public pool, open to whomever happens to wander in first.

By neglecting to properly differentiate between people who’d be a net positive for our country and those who wouldn’t, our failure to discriminate is quite literally killing us. 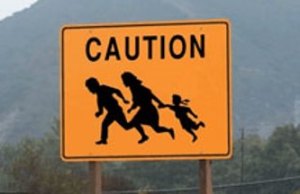 At this rate, the United States of America will no longer be a beacon of liberty to the world, or a shining city on a hill. We’ll still be a beacon, though: to every potential welfare-sucking leech who manages to summon the requisite energy necessary to flop their lazy carcass over our border and yell, “Feed me”.

If we weren’t so all-fired scared of potentially discriminating against anyone for any reason, such lunacy wouldn’t even be brought up for debate.

Our nation is in trouble, and although Obama has hastened and encouraged much of it, he’s not the original source: we are. Not until enough of us become so repulsed by such events that we demand action will our duly elected representatives have any reason to alter their behavior. Only if we begin to use good judgement as we once did, regularly, will our politicians respond in kind.

Darn it: if only we had a better word to use instead…

17 responses to “Being “Discriminating” when it comes to #Immigration would be a GOOD thing….”