I believe in Monsters, and Things that go Bump in the Night…

My wife and I have been watching a lot of old Law & Order episodes recently, back when the series dealt with its topics in a relatively even-handed way. And one line in particular keeps coming back to me.

It was spoken by ADA Jamie Ross (played by Carey Lowell), and it certainly applies to many of our current news items today: “I believe in monsters and things that go bump in the night, Jack. May they rot in hell, along with their attorneys.”

What else would you say about national monsters like Kermit Gosnell, whose abortion mill was so gruesome and stomach-turning that just reading the reports makes your skin crawl?

Or about tyrannical despots like Ahmadinejad in Iran, or Kim Jong-un in North Korea?

These men, each of them, ARE monsters…and are very, very real.

Lord willing, Gosnell will be spending the rest of this life behind bars for his atrocities. But with Ahmadinejad or Jong-un, our problems are perhaps even greater, since these men have dreams of devastation on an even grander scale. And the reason they have been allowed to flourish has been a lack of spine and judgement on the part of our country’s leaders.

I don’t know how many of you recall how Ronald Reagan dealt with the threats posed by the terrorist regime of Muammar al-Qaddafi in Libya. Thus, a quick history review may be in order. From History.com:

During the 1970s and ’80s, Qaddafi’s government financed a wide variety of Muslim and anti-U.S. and anti-British terrorist groups worldwide, from Palestinian guerrillas and Philippine Muslim rebels to the Irish Republican Army and the Black Panthers. In response, the U.S. imposed sanctions against Libya, and relations between the two nations steadily deteriorated. In 1981, Libya fired at a U.S. aircraft that passed into the Gulf of Sidra, which Qaddafi had claimed in 1973 as Libyan territorial waters. That year, the U.S. uncovered evidence of Libyan-sponsored terrorist plots against the United States, including planned assassination attempts against U.S. officials and the bombing of a U.S. embassy-sponsored dance in Khartoum, Sudan.

In December 1985, five American citizens were killed in simultaneous terrorist attacks at the Rome and Vienna airports. Libya was blamed, and U.S. President Ronald Reagan ordered expanded sanctions and froze Libyan assets in the United States. On March 24, 1986, U.S. and Libyan forces clashed in the Gulf of Sidra, and four Libyan attack boats were sunk. Then, on April 5, terrorists bombed a West Berlin dance hall known to be frequented by U.S. servicemen. One U.S. serviceman and a Turkish woman were killed, and more than 200 people were wounded, including 50 other U.S. servicemen. U.S. intelligence reportedly intercepted radio messages sent from Libya to its diplomats in East Berlin ordering the April 5 attack on the LaBelle discotheque.

On April 14, the United States struck back with dramatic air strikes against Tripoli and Benghazi. The attacks were mounted by 14 A-6E navy attack jets based in the Mediterranean and 18 FB-111 bombers from bases in England. Numerous other support aircraft were also involved. France refused to allow the F-111s to fly over French territory, which added 2,600 total nautical miles to the journey from England and back. Three military barracks were hit, along with the military facilities at Tripoli’s main airport and the Benina air base southeast of Benghazi. All targets except one were reportedly chosen because of their direct connection to terrorist activity. The Benina military airfield was hit to preempt Libyan interceptors from taking off and attacking the incoming U.S. bombers. 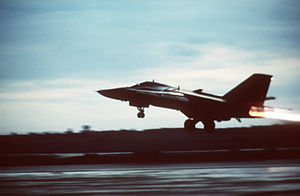 Qaddafi’s 15-month-old adopted daughter was killed in the attack on his residence, and two of his young sons were injured. Although he has never admitted it publicly, there is speculation that Qaddafi was also wounded in the bombing.

Even before the operation had ended, President Reagan went on national television to discuss the air strikes. “When our citizens are abused or attacked anywhere in the world,” he said, “we will respond in self-defense. Today we have done what we had to do. If necessary, we shall do it again.”

Notice, we didn’t just issue a “stern warning”. We didn’t simply “condemn” the actions. Reagan didn’t target some “strategic locations” in Libya: he dropped them where he knew people were. He even bombed Qaddafi’s home, and Qaddafi got the message. It would be two more years until the Pan Am Flight 103 Lockerbie bombing, which though ascribed to/apologized for by Libya is actually believed to have been ordered and carried out by Iran. The biggest bully in the neighborhood was largely neutered that day, and the world never looked at Qaddafi the same way again.

War is a terrible thing, but not to fight back when you’re at war amounts to suicide. When you’re dealing with monsters like these men, or like the monsters of our past in World Wars I & II, you have to speak to them in language they understand.

I’m eternally grateful that I didn’t have to make the call, but there can be little doubt that this was absolutely the appropriate response on Reagan’s part.

Contrast that to our leadership now. We equivocate and  apologize, which is rightly interpreted by our enemies as weakness. I’m not hoping for more war, ever, but by failing to respond overwhelmingly to tinpot dictators, we’re virtually guaranteeing an escalation of their actions, such as we’re seeing in North Korea. Leaders like Kim Jong-un understand only one thing: FEAR. They understand how to instill it, …and they know what it feels like.

“If Kim Jong-un decides to launch a missile, whether it’s across the Sea of Japan or in some other direction, he will be choosing willfully to ignore the entire international community, his own obligations that he has accepted, and it will be a provocative and unwanted act that will raise people’s temperature with respect to this issue,” Kerry said.

It’ll “raise people’s temperature”?? Oooohhh, …wow, that’s scary. I’m sure that Jong-un almost spilled his tea as he read that. 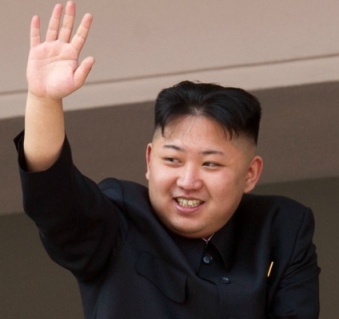 “I am quivering in my pudgy little shoes…”

As I mentioned a while back, “Peace through strength” is the only proven method by which our world can remain safe, because it’s only when the bad actors are too afraid to act that they allow themselves to be kept in check.

I wish it weren’t the case, yet it is.

The biggest and best military on the planet is worthless if no one actually believes that we’ll use it to its absolute fullest extent. When we have the fortitude and willingness to act, we are feared…and respected. Loved? Maybe, maybe not. But isn’t that infinitely better than what we have now? What good is it to be “liked”, yet mocked (or worse: ignored) by such backwater nations like Iran and North Korea? Is our world any safer this way? I’d argue vehemently that it’s not.

Obama came into office saying that he’d change how we are perceived throughout the world.

8 responses to “I believe in Monsters, and Things that go Bump in the Night…”