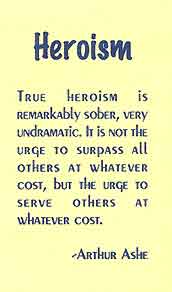 Last year, we covered several stories of heroism (“Land of the Fearful; Home of the Meek“). In each case, normal, everyday folks took extraordinary action while at work which, in a saner time in our history, would have garnered them nationwide recognition. In these cases, however, their bravery and willingness to act resulted in their being fired.

I said at the time why I felt this was the case:

“All three of these incidents have people acting in a heroic manner, either out of bravery, concern for others or just self-preservation. When did this become objectionable?

The answer, of course, is that now we are supposed to be timid, mild-mannered sheep, who turn a blind eye to people in need or even to our own safety. We aren’t supposed to question authority, even when that authority is nowhere to be found.”

So when I read the news report below, I was horrified that I may have been even more correct at the time than I thought. From the New York Daily News:

A Florida high school hero who wrestled a loaded gun away from a football player threatening to shoot a teammate was himself suspended for three days.

The 16-year-old, from Cypress Lake High School in Fort Myers, was punished for his part in disarming the boy who wanted to blast another student on the school bus ride home.

Witnesses said the suspect was aiming the .22 caliber revolver “point blank” at a student and saying he was going to shoot.

But, instead of rewarding the heroic teen who put his own life at risk, school authorities suspended him “for his role in an incident where a weapon was present”.

School district spokesman Alberto Rodriguez refused to comment in detail on the incident., only saying “Florida law allows the principal to suspend a student immediately pending a hearing.”

We have a young man who risks his life to save the life of another, and we reward him by…suspending him? What could the rationale for this possibly be, other than to send the message to others that they are never to think for themselves?

It is certainly consistent with the drumbeat that we hear from the Statists: “Give up your freedom, your pride and your common sense…and the State will take care of you“.

Except, of course, when it can’t.

In this case, there was no State authority nearby to remind the student wielding the gun that he was violating the school’s “gun-free-zone policy”. No, there was just an ordinary high school kid of remarkable bravery who decided to ACT, rather than duck.

In that same article from last year, I wrote:

“When I imagine this sniveling passivity taking an ever-increasing hold of our great nation, only one thing seems certain to me: no one is ever going to write a book or a movie of someone’s heroic ‘submission’ to superior forces.

And I very much doubt we’ll read a thrilling, inspiring account in a future history lesson of the man who ‘stood idly by’, watching, while an innocent person died.”

Taking that thought to its logical conclusion, psychologist Stanley Milgram famously once said,

“The disappearance of a sense of responsibility is the most far-reaching consequence of submission to authority.”

Allowing heroism to be portrayed as wrong or harmful stands heroism on its head. It attempts to redefine heroic action as inaction. This is insane, yet it is also central to the Second Amendment debate which is still raging around the country. Law abiding people who seek to protect themselves (and those around them) are demonized as being just as dangerous to society as the criminals.

We stand to lose something here far greater than a mere political skirmish, or an ideological debate. We’re in danger of voluntarily ceding one of the most essential aspects of what it means to be an individual, an American, and indeed a human being.

And if we allow ourselves to continue to be herded down this road, we’ll each be richly deserving of our ultimate fate.